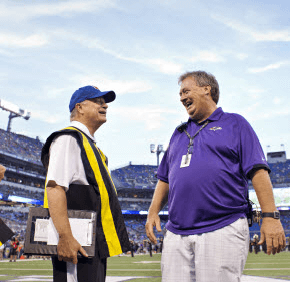 By Paul McMullen
pmcmullen@CatholicReview.org
Twitter @ReviewMcMullen
Between 71,000 fans, 92 players, some 3,000 other workers and more than three dozen CBS network cameras, filling everyone’s needs during the Baltimore Ravens’ Sept. 15 home opener at M&T Bank Stadium would appear to be a daunting logistical task.
Jobie Waldt was made for the job.
The Ravens’ senior manager for stadium operations knows football from the ground up. Waldt, 51, owns two Super Bowl rings as a valued member of the franchise, but Baltimoreans of a certain vintage remember him as the quarterback, in 1979, of the only 11-0 team in the history of Calvert Hall College High School.
“Jobie was a leader; he had a lot of athletic sense,” said Augie Miceli, the Cardinals’ coach then and still a math teacher at the Towson school. “One practice, I directed him and the receivers to devise a snap count for the hitch, the out and slant. I expected them to take 15-20 minutes. They did it in five.”
Even as a teen, Waldt knew that preparation beats troubleshooting.
When the defending Super Bowl champions meet the Cleveland Browns Sunday, players and fans will experience one of the nation’s top spectator venues. Some Ravens won’t notice the new carpet in their locker room, and a few suite-holders will neglect to note the plush new chairs in their air-conditioned box.
“We got out of here at 1:30 a.m. after the last (Aug. 22) preseason game,” Waldt said. “At 7:30 the next morning, we were pulling the carpet out of the Ravens’ locker room. In July, the morning after the soccer (U.S.-El Salvador) match, we were doing the same in 28 suites.
“This place is the like the Bay Bridge. It’s maintained every day.”
While the Ravens use M&T Bank Stadium for no more than 12 games a year, Waldt helps guide an operations team that readies it for everything from weddings, proms and bar mitzvahs to college lacrosse games and major concert acts.
Before U2’s “360-Degree” tour came to Baltimore in June 2011, Waldt went to Denver to observe construction of the band’s mammoth stage. Last January, he was part of Baltimore’s Super Bowl advance team in New Orleans, scouting everything from hotel meeting rooms to practice fields.
From owner Steve Bisciotti to head coach John Harbaugh to a back-up offensive tackle to Waldt, the Ravens succeed because they are usually ready for any and all contingencies.
“Jobie’s attention to detail, ability to work seamlessly with our stadium partners and strong work ethic contribute significantly to our success,” said Roy Sommerhof, the Ravens’ vice president of stadium operations.
Waldt was among the first local hires when the franchise relocated from Cleveland to Baltimore before the 1996 season. He had been working game-day operations at old Memorial Stadium, most notably for the Stallions, of the Canadian Football League.
Between Calvert Hall and becoming an authority on stadium operations, Waldt set many passing records for Frostburg State University, tried out for some NFL teams, played professionally in Germany and did “odds and ends,” including landscaping.
Waldt, who went to the former parish school at St. Matthew, Northwood, comes from a large northeast Baltimore clan. Among his many second cousins is Mission Helper of the Sacred Heart Sister M. Judith Waldt.
He and his wife, Kim, live in Brooklyn Park, a short commute south of the stadium. He also considers himself part of the Ravens’ family.
“The Ravens bring in good people who trust each other, go that extra yard to help each other,” Waldt said. “That’s why we have two Super Bowl rings.”
The Ravens and the Maryland Stadium Authority operate M&T Bank Stadium. On any given Sunday, Waldt will record the game for Bisciotti, send a repair team to a fan’s broken seat or observe the edifice shake, whether it’s from rail traffic through the Howard Street Tunnel or raucous fans.
“I have a lot of passion about coming to work,” Waldt said. “I’ve got the best office in Baltimore.”
Also see:
Oblate Sisters of Providence visit Ravens at practice
Ravens offense in a giving mood in final home exhibition
PrevNext