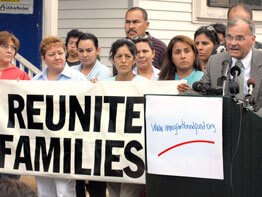 SILVER SPRING, Md. – Massachusetts investment banker and philanthropist Robert Hildreth’s success in business means Luis Delgado, a Mexican immigrant arrested in an immigration crackdown on a Maryland roofing company June 30, will get to be with his wife and children for the months it will take his legal case to be adjudicated.

The two men didn’t meet until Aug. 11, though Mr. Hildreth’s money helped pay the $2,500 bond that has enabled Mr. Delgado to stay out of detention pending the resolution of his immigration prosecution.

Mr. Hildreth’s offer to help pay a few immigrants’ bonds after a raid in 2001 has now led to the creation of a national fund to help other people facing detention far from their homes and families.

His concern for families separated after a major immigration raid in New Bedford, Mass., last year led Mr. Hildreth to start writing checks so some of those factory workers wouldn’t have to wait in detention centers thousands of miles away while their cases were heard.

Hundreds of workers arrested at the New Bedford textile factory were shipped to detention centers in Texas within two days of the raid.

At an Aug. 11 press conference at Casa de Maryland, an immigrant community services center in Silver Spring, Mr. Hildreth explained that the little project he started last year has cost him more than $200,000. Now Mr. Delgado and 100 or so people around the country can thank Mr. Hildreth for starting what has become the National Immigrant Bond Fund.

In announcing the bond fund, Don Kerwin, director of the Catholic Legal Immigration Network, known as CLINIC, said three bishops so far have endorsed the effort and serve with him on the fund’s committee. They include Coadjutor Bishop Jaime Soto of Sacramento, Calif., CLINIC board chairman, Bishop Nicholas DiMarzio of Brooklyn, N.Y., and Bishop Thomas G. Wenski of Orlando, Fla.

Community agencies such as the diocesan affiliates of CLINIC will be the conduit for money from the bond fund, which is provided on a matching basis, with families required to put up half the cost. When money is repaid as cases are resolved, the funds go back into the pool to help future applicants.

In an interview with Catholic News Service after the press conference, Mr. Hildreth said childhood lessons from his parents and his Catholic upbringing gave him a solid appreciation for immigrants’ role in creating and developing the United States.

He said he developed a deep love for Latin America while working in Bolivia as an economist with the International Monetary Fund and then throughout a career based in part on buying and selling Latin American debt and property.

“Latin America has been very good for me financially and professionally,” he said.

His first contribution to the New Bedford group was to kick in the money to hire someone to coordinate the work of dozens of pro-bono attorneys who were helping the arrested immigrants and their families, he explained.

When he realized those arrested weren’t even in the same part of the country as their attorneys, he offered to help a few of them pay their bonds. A few grew to 37, whose release from detention was made possible with Mr. Hildreth’s money.

Since then his understanding has grown regarding the difficulties faced by immigrants caught up in workplace raids and the absurdities of how the system works.

“It cost the government $200,000 in airfare to transfer everyone to Texas” from New Bedford, he said. And every time someone paid their bond, the government had to pay to move that person back to Massachusetts.

At the press conference, he likened the offense – using false identification – with which many immigrants were charged in another massive raid at a meat processing plant in Postville, Iowa, in May to what many college students do when they use a phony ID to get into a bar.

He asked what would happen if college bars were raided in the same manner and those arrested shipped to detention centers thousands of miles away while their cases were processed.