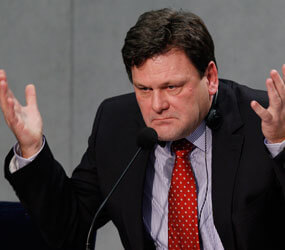 VATICAN CITY – In the middle of Pope Benedict XVI’s new book is a story about a hat, and it sheds light on the trials and tribulations of the modern papacy.

The book’s interviewer, German journalist Peter Seewald, recalled a public appearance one winter day when the pope donned the “camauro,” a red velvet cap trimmed with ermine that was last worn by Pope John XXIII. Seewald suggested this was one of those subtle signals that marked a return to the old ways of the church.

In reading the pope’s answer, one can almost hear him sighing.

“I wore it only once. I was just cold, and I happen to have a sensitive head. And I said, since the camauro is there, let’s put it on. But I was really just trying to fight off the cold,” he said.

The pope’s appearance in the cap caused a minor uproar in the media, which saw it as a kind of pre-Vatican II fashion statement. In the book, the pope said he hasn’t put it on since that day, “in order to forestall over-interpretation.”

“Light of the World: The Pope, the Church and the Signs of the Times” is that kind of book: It deflates myths, explains papal decisions and offers unexpected insights, leaving the German pontiff in much clearer focus.

Perhaps most surprising is that Pope Benedict, an academic theologian whose speeches can challenge even erudite listeners, comes across in these pages as a very human and accessible figure, one who communicates simply and directly.

“The image that emerges is not that of a man isolated in the Vatican, but a pope who knows what is going on in the world and is willing to talk about everything, with a clear idea of what can contribute to the spiritual and social well-being of humanity,” said Passionist Father Ciro Benedettini, vice-director of the Vatican press office.

The pope himself seemed to realize that this was an opportunity to set the record straight on some things he keeps reading about in the media. Newspapers sometimes portray the German pontiff as a remote figure who has cut back on meetings and contact with outsiders, but the pope said that’s inaccurate.

“There are, I believe, few people who have as many meetings as I do,” he said. He said he sees a continual stream of bishops, world leaders, old friends and close advisers, and relaxes in the evening with his staff to watch DVDs.

“All in all, therefore, I cannot say that I live in an artificial world of courtly personages; on the contrary, through these many meetings I experience very directly and personally the normal, everyday world of this time,” he said.

To those who see him as trying to roll back the Second Vatican Council in small steps, including liturgical modifications, the pope again cautioned against over-interpretation. For example, he spoke about introducing the practice of having people receive Communion from the pope on the tongue while kneeling.

“I am not opposed in principle to Communion in the hand; I have both administered and received Communion in this way myself,” he said. He adopted the current practice, he said, to “send a signal and to underscore the real presence with an exclamation point.”

He said he felt this was necessary precisely at papal Masses, which have widely divergent congregations of people, and where people might think everyone is automatically supposed to receive Communion.

“I have heard of people who, after receiving Communion, stick the host in their wallet to take home as a kind of souvenir,” he said.

To those wondering, “What are you trying to do as pope?” – seemingly a huge question – the book offers important insights. The pope identified a priority task as rekindling an awareness of God in personal lives and in society.

He described this project not in terms of restoring church influence, but in responding to global problems that could otherwise add up to catastrophe – economic, environmental, biological and moral catastrophe. In this sense, he said, the church’s role is to promote a new attitude of moral awareness and a spirit of self-sacrifice.

“Man is clearly in danger; he is endangering both himself and the world …. Man can be saved only when moral energies gather strength in his heart; energies that can come only from the encounter with God,” he said.

Pope Benedict was particularly insistent on the problem of the huge public debt run up by various countries around the world. “We are living at the expense of future generations,” he said, and “huge debts are treated as something that we are simply entitled to.” He called for a global examination of conscience on such economic issues.

In short, the book reveals the pope as more attuned to the practical issues of the day than many might have imagined. He also comes across as down-to-earth regarding matters of faith.

“I am no mystic,” the pope said bluntly when his interviewer tries to suggest a mystical vein in his papal role.

Likewise, the pope wouldn’t be goaded into a discussion of “end times” and fanciful readings of the Book of Revelation, saying he is “skeptical” about such interpretations. He does believe in a real last judgment, but said Scripture cannot be used to calculate when the world will end.

On some topics, the pope was downright terse, refusing to be led down the journalistic path. The shortest exchange in the book is this one:

“Are you afraid of an assassination attempt?”

Overall, the pope seems to balance between a positive and negative view of the modern world. He said he is disappointed at the lack of interest in the faith and that “the overall trend of our time continues to go against the church.”

More than once, he referred to “enemies” that lie in wait, ready to strike the church at the first opportunity. “In Catholic Germany, there is a rather large group of people who, so to say, are on the lookout for an opportunity to attack the pope; that is a fact,” he said.

He finds hope in a somewhat surprising place: not in traditional Catholic structures and bureaucracy, which he described as “spent and tired,” but in new initiatives, especially those involving young people. While Christianity no longer holds the “command post” in world opinion, it has the right spirit, he said, and added:

“I am quite optimistic that Christianity is on the verge of a new dynamic.”