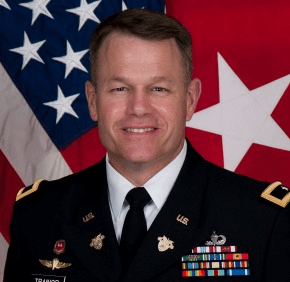 By Paul McMullen
pmcmullen@CatholicReview.org
Twitter: @ReviewMcMullen
Mount St. Mary’s University in Emmitsburg announced the appointment June 20 of an interim president, one who is interested in taking the job on a permanent basis.
Brigadier General Timothy Trainor has spent the last six years as dean of the Academic Board at the United States Military Academy at West Point, N.Y. His retirement ceremony will be held June 24. It will take full effect Sept. 1, by which time he will be working at the Mount.
According to a school spokesman, Trainor will serve on an interim basis until a new president is appointed.  Asked by the Catholic Review if he would apply for the permanent position, Trainor replied, “Yes. I’m excited by what I see. Hopefully, this will be a long-term assignment.”
Karl Einolf has served as acting president of Mount St. Mary’s since the March 1 resignation of Simon Newman, who came under intense criticism, both locally and nationally, for his comments regarding the retention of struggling freshmen at the second-oldest Catholic college in the United States. The controversy has been cited as contributing to a drop in incoming freshmen, from 500 in 2015 to 445, a number expected to grow, this year.
“I sense that a lot of healing has already gone on,” said Trainor, who visited campus on a recent Alumni Weekend. “I’m on an engage-and-learn strategy, with students, faculty, staff and alumni. I want to get their ideas and reassure them that Mount St. Mary’s remains committed to its mission, and committed to the development of its students.”
According to a news release from Mount St. Mary’s, Trainor led more than 800 faculty and staff across 13 departments at West Point, a federal service academy which trains and develops officers for the U.S. Army. Other than origins in the early 19th century, West Point and Mount St. Mary’s would appear to have little in common, but Trainor found otherwise.
“It’s a beautiful campus, just like West Point,” Trainor said. “It was obvious to me that people took pride in the appearance of the Mount, and that translates to pride in the institution.”
As he transitions to civilian life, what he found in Emmitsburg had its appeal.
“What I was looking for, in staying in higher education, was another values-based institution,” Trainor said. “Both Mount St. Mary’s and West Point have a strong commitment to a core curriculum and the liberal arts, and preparing students for professional success. Both have a commitment to the holistic development of students, and an alumni base that is interested and engaged.”
According to the Mount news release, as chief academic officer at West Point, Trainor was “responsible for governance and planning in regard to faculty, curriculum, accreditation, master planning board, athletics and class committees.” He has been published on innovative leadership, systems engineering and operations, and decision-making.
Prior to his appointment as dean of West Point, Trainor spent four years there as a professor and head of the Department of Systems Engineering and three as director of the Engineering Management Program. A 1983 graduate of West Point, he has served in Iraq and Bosnia. Trainor grew up in New York, and went to Don Bosco Preparatory High School in Ramsey, N.J.
“Trainor brings to the Mount extensive experience in leadership and a deep understanding and appreciation of the Catholic liberal arts tradition,” said Mary Kane, chairwoman of the university’s Board of Trustees, which made the appointment. “The hallmarks of his tenure at West Point – a commitment to the liberal arts, to the intellectual life of his students, and to the development of leaders of character – make him an ideal leader for the Mount.”
“I welcome the news … and pledge my full support, and that of the Archdiocese of Baltimore, for Dr. Trainor and for the mission of this outstanding university,” Archbishop William E. Lori was quoted in the news release. “I have no doubt that the university will continue to make great strides under Dr. Trainor’s leadership.”
Trainor earned his doctorate in industrial engineering from North Carolina State University, and an MBA from the Fuqua School of Business at Duke University. He and his wife, Donna, a retired U.S. Army colonel, are the parents of three children, Cory, Daniel and Zachary, the first two graduates of West Point and the latter a member of its class of 2018.