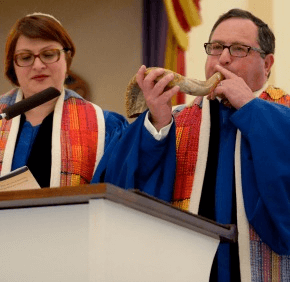 By Christopher Gunty
editor@CatholicReview.org
Religious leaders from many faiths and denominations gathered April 25 in Baltimore because they hear the cries of the people of the city.
“We come here because we have not only heard the cries of our people, we are responding to their needs,” said the Rev. Alvin C. Hathaway Sr., senior pastor of Union Baptist Church.
A diverse group of worshippers filled the Basilica of the National Shrine of the Assumption of the Blessed Virgin Mary for the prayer service to mark the anniversary of the riots that spread through Baltimore April 27, 2015, after the funeral of Freddie Gray Jr., who died of injuries suffered while in police custody.

Showing solidarity for a stronger Baltimore, Archbishop William E. Lori and area faith leaders join hands in song to close the April 25 interfaith prayer service for peace at the Basilica of the National Shrine of the Assumption of the Blessed Virgin Mary in Baltimore. (Kevin J. Parks/CR Staff)

Rev. Hathaway said it is important that the city have a moral center. We recognize that much of the development in the city centers around “eds and meds” – education, schools and health care. “And that’s good,” he added. “But on this day, we declare that development – true development – is done by those people who are spirit-led.” He said it is important that people renounce any divisive language, bigotry and any kind of violence.
“From Sandtown to Highlandtown, we have heard your cries,” the pastor said.
“You will see a faith community that will be active and engaged, a faith community that will move our people from hope to wholeness, a faith community that will move our people protests to programs to projects to progress,” Rev. Hathaway said.
The prayer service included more than three dozen members of the clergy from Baltimore and the region. Faiths represented included Catholic and other Christian churches, as well as Judaism, Islam, Hinduism and Buddhism. Many civic leaders attended, including Baltimore Mayor Stephanie Rawlings Blake, Baltimore City State’s Attorney Marilyn Mosby, other local and state elected officials, and representatives of the governor’s office.

Prayers of healing and unity in Baltimore was the theme for the April 25 interfaith prayer service held at the Basilica of the National Shrine of the Assumption of the Blessed Virgin Mary in Baltimore. (Kevin J. Parks/CR Staff)

The call to worship began with the blowing of the shofar by Rabbi Steven M. Fink of Temple Oheb Shalom, accompanied by Cantor Renata Braun. Imam Derrick Amin, chaplain at Morgan State University, followed with a chanted call to prayer in Arabic.
In his welcome message, Archbishop William E. Lori of Baltimore thanked those who gathered noting, “We are united in prayer for the welfare of Baltimore. We are united in prayer for the people of Baltimore.”
He recalled walking through the streets of Sandtown-Winchester the day after the unrest. He saw a burned-out car along a deserted street, where there would normally have been the busy activity of a weekday.
“It was like an eerie scene from a movie,” he said, “the aftermath of the surreal drama that had unfolded just hours earlier, unlike anything that had been seen in our city since the 1960s.”
He celebrated Mass that weekend at St. Peter Claver Parish in West Baltimore, “located just a few blocks from where that car was left as a symbol of the anger and desperation felt by many in our city. It was a joyful service, attended by many who knew that hope was indeed possible for a neighborhood and a city for which hope seemed so distant just a few days earlier. It was also marked by a profound determination for healing and change,” the archbishop said.
After the unrest of a year ago, Archbishop Lori said faith leaders reached out to each other instinctively. “Each of us is committed to the city and has long had initiatives and programs in place – but we all knew that together we could accomplish far more and felt our unity could inspire others to realize the same.”

He said he hoped the unity of faith leaders in their commitment to be leaders of change for the city would be a model for all.
“It is only together that we can continue the healing in our city and achieve our ultimate goal: ensuring that the God-given dignity of each of our sisters and brothers in Baltimore is recognized, respected and nurtured,” he said.
The prayer service included reflections on readings from sacred scriptures, including the Passover Haggadah, the Bible and the Quran.
Rabbi Fink said the word, “shalom,” in Hebrew, has many meanings, and its root meaning is “wholeness.”
“We pray tonight for a Shalom Baltimore, a peaceful and whole city.”
The rabbi noted that the Jewish community recently sat at Seder tables as part of their Passover commemoration.
“The Seder is not just about the liberation of the Jewish people from Egyptian slavery,” he said. “It is about the journey from ‘g’nut’ to ‘shevach,’ from the degradation of slavery to the praise of God, from the depths of oppression to the ultimate redemption of all humanity in the messianic age.”
He added, “We speak tonight not just of political repression but economic oppression, of racial oppression, of the systematic oppression of neighborhoods and classes of human beings.”

A Catholic Review video with scenes from the service follows; story continues below.

Reflecting on a reading from St. Paul’s Letter to the Hebrews, the Rev. Mary Gaut of the Presbytery of Baltimore, recalled watching the events of April 27 a year ago unfold “from the relative comfort of our own homes” through the mediated perspective of a TV camera, as many did. “We got a pretty good sense of what was going on, but how great was the distance between us and what was happening there on the streets of our town?” Events happening a few miles away felt as though they could have been as distant as hundreds or thousands of miles. “If we were not there and we did not hear the shattering of glass or the pounding of boots running down the street, we did not smell the smoke or feel the heat of the fires, rather we heard news crews describe these things for us,” Rev. Gaut said.

“Though we may have driven through these streets before, we realized we really did not know our neighbors,” she said. She said the boundaries between those who lived in the ravaged areas and those watching on TV seemed insurmountable. Noting the theme of the prayer service, “From Hope to Wholeness,” she said we have some idea of what wholeness might be like for Baltimore. “This is a critical moment in our city as well as in our nation in which we are called to a new level of involvement, to a familiarity with our neighbors and our neighborhoods, unfiltered by the prejudices, technologies and policies that have for too long kept us apart.
“This is the moment when we must come together and to bring the voice of moral urgency to the issues before us. Hope for a just and whole tomorrow can no longer be a private prayer; it must become a public passion,” Rev. Gaut said.
Choirs from New All Saints Parish in Liberty Heights and Union Baptist Church led the congregation in song. Members of the community prayed for the intentions of houses of worship, health care institutions, those who work in public safety, educational institutions, for charitable agencies and for children and young people.

Members of the congregation at the April 25 interfaith prayer service for peace at the Basilica of the National Shrine of the Assumption of the Blessed Virgin Mary in Baltimore, reach across the aisle in song for peace and unity. (Kevin J. Parks/CR Staff)
The prayer service reached a crescendo with a charge and commissioning by Dr. Sheridan Todd Yeary, senior pastor of the Douglas Memorial Community Church in Baltimore. At one point, he asked those gathered to look at the person on their right and left, and say to each, “I see you and I love you.” After the animated congregation spent a minute following his direction, he said, “It’s amazing what energy would be generated if we would but open our eyes and see.”
He recalled the unrest of a year earlier as an expression of pain that overwhelmed our sensibilities. “The injury that led to the expression of pain is deeply embedded in the fabric of the nation we would call home,” he said.
Yeary charged the congregation to “leave this place with a holy dissatisfaction. Leave here grateful that we live together, but leave here not satisfied until justice is done for all. …
“I charge you tonight that if we are going to make a tapestry – that you leave with needle and thread in your hand ready to sew hope, love, joy, peace and end suffering.”
The prayer service concluded with a rousing chorus of “We Shall Overcome,” as faith leaders in the sanctuary joined hands and sang, and members of the congregation did the same.
The Rev. Pat Payne, pastor of St. John Lutheran Church in Pimlico, told the Catholic Review before the prayer service that the time has come for dealing with the problems of poverty, segregation and lack of opportunity. The interfaith effort becomes the conscience of such a reform.
She said it was important to participate in the event because “the challenges the city faces are the challenges of the region and the whole state. If we don’t solve them here, they will go unsolved, not just here but in the rest of the state.”