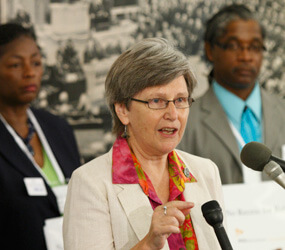 WASHINGTON – The Rev. Drew Nettinga opened a prayer breakfast July 28 at the U.S. Capitol with a reminder to Congress that he and other people of faith will be vigilant and persistent on the issue of health care reform.

“Congress may be taking a recess, but we have work to do,” Rev. Nettinga said, referring to the break members of Congress traditionally take in August.

President Barack Obama has pushed for the House and Senate to pass health care reform before the recess begins Aug. 2, but as the date approached there was little consensus on any reform bill and a vote became increasingly unlikely.

Rev. Nettinga of San Lorenzo Community United Church of Christ in San Lorenzo, Calif., urged Congress to pass legislation this year and said failure to pass a bill could “derail” the entire effort.

Throughout the summer, the U.S. Capitol and other Washington venues have been the scene of various interfaith conferences about health care reform, but among new faces attending the June 28 meeting was Paula Arceneaux of St. Mary of the Angels Catholic Church in New Orleans.

She has spent time working to reduce crime in New Orleans with the Micah Project, an affiliate group of People Improving Communities Through Organizing, known as PICO. She is now involved in both local and national issues that concern PICO, especially health concerns.

Arceneaux outlined what faith groups have planned during the month of August to push for health care reform.

A mix of pastors, clergy and parishioners nationwide will speak with members of Congress in their home districts Aug. 11; a total of 100 meetings are to be held that day. Town hall meetings will be held throughout the month, Arceneaux said. Paid organizers also will be working in key states to push Congress to act on reform, she said.

Besides PICO, other faith-based organizations supporting the July 28 gathering on the Hill included Catholics in Alliance for the Common Good, Faith in Public Life, and Sojourners, an evangelical Christian group that addresses justice issues.

Various speakers at the prayer breakfast mentioned they had had enough of what they described as Washington’s procrastination on health care reform.

“There comes a time when delay becomes denial,” Arceneaux said.

Sister Simone Campbell, executive director of Network, a national Catholic justice lobby, echoed many speakers’ concerns about time. Sister Simone has been an active participant in the effort to pass health care reform in Washington. Since late June she has spoken at multiple interfaith prayer services and meetings.

Fear of change, Sister Simone said, is what is holding back members of Congress now. Instead of making a decision many representatives are getting confused by insignificant details, she said.

“Too often in D.C. we can get caught in the details and in the argument,” she said. “The people of the United States are the ones that set us straight.”

Sister Simone, a Sister of Social Service, encouraged those gathered at the Capitol to keep up their efforts, because she said there is no recess from the health needs of America.

“Let’s stay on message, as they say here in Washington, because here the message is the truth,” she said.