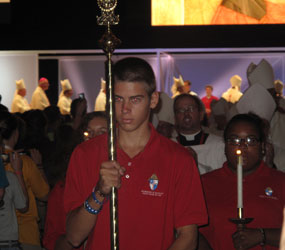 MADRID – Sitting inside Palacio de Deportes Aug. 20 with more than 25,000 World Youth Day pilgrims from the United States surrounding him, Thomas Brennan tried hard not to look up.

If he did, he would have seen himself on large video screens acting as an altar server during a Mass celebrated by the U.S. bishops.

“It was truly overwhelming,” said Brennan, a parishioner of The Cathedral of Mary Our Queen and a student at Loyola Blakefield in Towson. “It’s a once in a lifetime experience and I was just blessed to have that experience. It was absolutely fantastic”

Brennan was joined by four other Archdiocese of Baltimore pilgrims who were also selected as altar servers for the Mass, which was concelebrated by Archbishop Edwin F. O’Brien.

“It was certainly a little nerve-wracking and I was sweating a little bit,” Brennan said.

The other altar servers – Teisha and Keisha Miles, Amanda Brechbill and Will Warner – all were humbled by their opportunity.

“It was crazy cool,” Teisha said. “But, then you realized it was Mass and everyone was there for the same reason. That made it calmer.”

A day after leading the procession of altar servers, priests and bishops into the arena with the crucifix, Warner was pinching himself.

Teisha Miles, a parishioner of St. Veronica in Cherry Hill, was particularly impressed by the presence of one person.

“Our archbishop was there, which was awesome,” said Miles, who talked to Archbishop O’Brien before Mass.

The archbishop met with the Baltimore and Mount de Sales pilgrims the next day at a downtown church. He listened to stories of pilgrims, who shared tales of surviving an overnight pilgrimage in the rain and meeting people from all over the world.

Marimar Trejo, a parishioner of St. Joseph in Cockeysville, told Archbishop O’Brien that one of the pope’s messages had particular resonance.

“It touched my heart when he said ‘Don’t be afraid to be a Catholic,’ ” Trejo said.

Archbishop O’Brien asked them to pray for vocations to the priesthood, family life and in ministry. He said adoration of the Blessed Sacrament is a powerful tool to aid in the increase of vocations.

“We cannot follow Jesus on our own,” the pope said. “Anyone who would be tempted to do so ‘on his own,’ or to approach the life of faith with kind of individualism so prevalent today, will risk never truly encountering Jesus, or will end up following a counterfeit Jesus.”

Sarah Huber, a student at Mount de Sales, said relativism is “the idea that there’s no absolute truth. If there’s no truth, people can go around doing what they want with no boundaries.”

Archbishop O’Brien told the groups: “It sounds so logical to be tolerant, you know? Being tolerant doesn’t mean to accept everything as true. It means to accept the person, but making distinctions about what is being said and what direction life should be led in.”