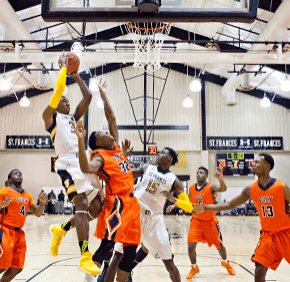 By Kyle Taylor
Special to the Review
Well aware of all that comes with donning the black and gold basketball jersey representing St. Frances Academy, Rashad Hawkins called it an honor.
“I know about the school’s tradition,” said Hawkins, a junior in his first season on the Panthers’ varsity. “It means an awful lot that they chose me out of a lot of people to play for this team.”
It’s difficult to talk about the school and not mention its highly successful boys’ and girls’ programs, both of which are ranked in The Sun’s Top 10. Oblate Sister of Providence Sister John Francis Schilling, at the school since 1984, has seen that effect, for better or worse.
“It’s been a very important part of our growth as a school,” said Sister John Francis, president of the Baltimore school. “It can be both good and bad. It brings us notoriety because people like sports and they know us for that, but people may think we’re all about basketball, which is not true.”
Watch a video.
Sister John Francis, present from the program’s start, credits the late Devin Gray for giving it legitimacy.
Not long after the Panthers moved up from Catholic Youth Organization status, Gray led them to their first Baltimore Catholic League (BCL) championship in 1990. He starred at Clemson University and played in the NBA. Gray died from a heart attack last August.
Subsequent players such as Mark Karcher, Sean Mosley, who played at the University of Maryland, and R.J. Williams, a junior guard at Loyola University Maryland, maintained the momentum that saw the Panthers continue to earn berths in the Alhambra Catholic Invitational Tournament, hosted every March by Cumberland’s Bishop Walsh School at Frostburg State University.
William Wells built the program, in the process coaching in more than 500 victories. Nick Myles, the school’s athletic director and in his third year as the boys’ head coach, credits the time he spent as an assistant coach to Wells with preparing him.
“I just want to make sure I keep the standards of the program,” Myles said. “I want the tradition to live on long after I’m done. I want to keep the standards high and keep pushing.”
Under coach Jerome Shelton, the girls have dominated the Interscholastic Athletic Association of Maryland (IAAM), since 2000 winning eight championships. He’s been at the school since 1985 and been coaching the girls since 1991, and has observed both programs become what they are today.
“I’m proud of what we’ve accomplished,” Shelton said. “We’ve been fortunate, blessed to have quality student-athletes who can compete at a very high level. I’ve been fortunate to see the evolution with both programs. We’ve gone from hoping we can win to thinking we can win.”
The most prominent player to come out of the girls’ program is Angel McCoughtry, who dominated the Big East Conference while playing at the University of Louisville, was No. 1 selection in the 2009 WNBA draft, joined the Atlanta Dream and went on to win Rookie of the Year.
The entire St. Frances Academy community celebrated her key role for the United States at the 2012 London Olympics, where McCoughtry earned a gold medal.
From Sister John Francis, who began the girls’ program, down to her current coaches, success off the court is paramount.
“It’s the pleasure of watching the kids live their dreams, seeing kids go from high school kids to adults and becoming productive citizens in society,” Myles said. “All these kids come to school and dream of playing college basketball and getting a free education. Watching them go through that process is a coach’s dream.”
Also see:
Inside Sports: DeSales runners thrive in any environment
Inside Sports: No 4-0 for select Calvert Hall seniors
Inside Sports: Loyola’s water polo team flows into swim season
Inside Sports: NDP proves its A conference caliber
Inside Sports: No bumps for Seton Keough Field Hockey
Inside Sports: Reif cup honors Curley coach, Calvert Hall parent
Inside Sports: John Carroll’s marching band plays, and practicies, hard
Inside Sports: Ellie Gonzalez a national-class runner at Catholic High
Inside Sports: Spalding’s broad-based program decades in the making
PrevNext