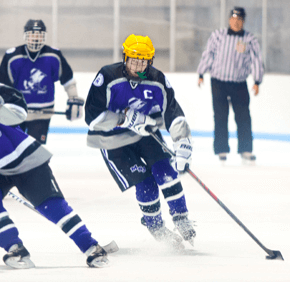 By Maria Wiering
mwiering@CatholicReview.org
Mount St. Joseph High School senior C.J. Shaw doesn’t have a clear memory of learning to skate – he was just a tyke – but he does remember what it felt like to receive the yellow helmet last fall.
After years of wearing a black helmet, the yellow made the defenseman feel like he stood out – as both a leader and a target.
The helmet is a Mount St. Joseph ice hockey tradition, signifying the wearer as a captain. For Shaw, it was an achievement years in the making.
As the U.S. ice hockey teams take great expectations into the 2014 Winter Olympics in Sochi, Russia, Shaw and his teammates at the all-male school in Irvington demonstrate the commitment and investment the game demands, even for amateurs, due to its high cost and – in Maryland – logistical challenges.
Hockey is the only sport for which Mount St. Joseph charges an activity fee, $700 this year, most of which goes toward rink rentals. The Gardens Ice House in Laurel, where the Gaels practice, charges about $350 for 90 minutes of ice time, said Kraig Loovis, the school’s athletic director.
Factor in equipment and travel – it’s a 30-minute commute from school to rink – and hockey families can annually spend thousands on the sport. Parents also sacrifice time to shuttle kids to practice, although upperclassmen help with carpools, Shaw said.
Head coach Rob Merson, 51, agrees that hockey requires an extra level of commitment from the players and their parents.
“If it wasn’t for the parents’ help and dedication,” he said, “our program would never happen.”
Every opponent overcomes a similar challenge.
“I’m glad we don’t have a home rink sometimes,” Sam Rowan, 18, said. “Going on the bus (to games) is a lot of fun.”
The cost and competition for ice time limits the Gaels’ practices once the season starts, as allotted rink time is usually consumed by games. To compensate, most Gaels also play club hockey. Shaw, 17, has been a member of the Howard Huskies, a Columbia-based club team, since he was 5. Between the two teams, he’s on the ice six days per week.
That is essential, Shaw said, in a sport that requires smarts, stamina and stellar stick skills.
“You need to be on your toes basically every single play,” he said. “You don’t have a lot of time. Once you get the puck you need to know what to do right away with it.”
Mount St. Joseph has three hockey teams – Varsity I, Varsity II and Junior Varsity. Varsity I goaltender and senior Rowan said the school’s hockey reputation factored into his high school selection.
The program has won titles in the Maryland Interscholastic Athletic Association and the Maryland Student Hockey League. Loovis attributes the Gaels’ recent success to now-retired head coach Erv Terwilliger, who in the 1990s helped revive a sport in which the school was winning titles in the early 1940s.
The Gaels have a losing record this season, but that hasn’t discouraged Shaw.
“We have a great history, of competitive and winning hockey,” he said. “When you put on the jersey, you know that you’re playing for a school that has that history. You want to continue that and win championships for the school.”
Shaw said that the Gaels’ chief rivals are Calvert Hall and DeMatha Catholic High School in Hyattsville. They’ll face DeMatha Feb. 7 at the Gardens Ice House in the third annual American Heroes Hockey Challenge. Last year the game raised $18,000 for the Wounded Warrior Project.
Also see:
Inside Sports: Former Mercy basketball coach still on the scene
Inside Sports: St. Frances Academy grows its basketball legacy
Inside Sports: DeSales runners thrive in any environment
Inside Sports: No 4-0 for select Calvert Hall seniors
Inside Sports: Loyola’s water polo team flows into swim season
Inside Sports: NDP proves its A conference caliber
Inside Sports: No bumps for Seton Keough Field Hockey
Inside Sports: Reif cup honors Curley coach, Calvert Hall parent
Inside Sports: John Carroll’s marching band plays, and practicies, hard
Inside Sports: Ellie Gonzalez a national-class runner at Catholic High
Inside Sports: Spalding’s broad-based program decades in the making
PrevNext