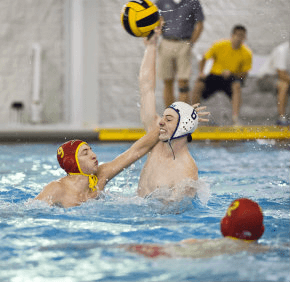 By Elizabeth Lowe
elowe@CatholicReview.org
Twitter: @ReviewLowe
TOWSON – There is no offseason for most swimmers at Loyola Blakefield, as JP Clancy and Colin Roddy experienced the first weekend of November.
The pair are on Loyola’s water polo and swim teams, as well as the year-round club swim team, Loyola Blakefield Aquatics (LBA) Inc. Seniors and Dons’ swim team captains, the two are in the pool 49 weeks out of the year.
Clancy, Roddy and 13 water polo teammates spent Nov. 2-3 competing in – and winning – the Eastern Preps water polo championships at the U.S. Naval Academy in Annapolis. Loyola Blakefield defeated Malvern (Pa.) Preparatory School, 7-5, in the final.
On Nov. 4, less than 12 hours after that victory and the official end of water polo season, Clancy, Roddy and many of their teammates were back in the water for swim practice.
“With our last game ending around 6:30 p.m.,” said Roddy, who communicated by email, as he is always on the go, “I went home and finished up my homework and was able to get to bed at an earlier hour than usual. This long night sleep was in preparation for practice we had on Monday morning.”
Watch a video.
Transitioning from one sport to another without a break is a testament to the student-athletes, said Keith Schertle, Loyola’s water polo and swimming coach who also heads LBA, a co-ed team for ages 4-18.
Nearly 40 Loyola student-athletes play water polo, swim for the Dons and a club swim team, Schertle said.
Water polo and swim practices were particularly grueling the week of Oct. 28, as the transition from water polo to swimming began three days after the Dons lost to Calvert Hall in the Maryland Interscholastic Athletic Association water polo championship.
On Oct. 31, water polo practice was 6:10-7:20 a.m., then again 3:15-4 p.m. After a five-minute break, about 20 guys jumped back in the water for swim practice, 4:05-6:15 p.m.
“Every water polo practice includes an hour-and-a-half swim,” said Schertle, who noted that a typical day during water polo season includes practice 6:10-7:20 a.m., then again 3:15-4:55 p.m., followed by swimming 5-6:30 p.m.
During swim season, practice is usually 6-7:20 a.m. twice a week, then 3:30-5:40 p.m. In addition, the Dons practice for two-and-a-half hours on weekends.
“You need dedication,” said Clancy, a parishioner of Church of the Nativity in Timonium. “You have to love what you’re doing to stick with it. It’s hard to wake up and get yourself out of bed and drive to practice at 5:45 a.m. … It’s just part of our workout. We don’t complain.”
Clancy won the 100-yard butterfly at the MIAA championships last year, and helped the Dons to titles in the 200 and 400 freestyle relays, the latter with a time that brought them All-American honors.
At the 2013 IAAMs, Roddy, a parishioner of Church of the Immaculate Conception in Towson, was fourth in the 200 individual medley and seventh in the 100 breaststroke.
Schertle’s schedule is as demanding as that of his student-athletes. Most days he is at Loyola 5:30 a.m. to 7 p.m.
“It’s my home away from home,” he said. “I like it. For me, it’s not work.”
Over the decades, Loyola’s program has produced many elite swimmers who competed in college, often at Ivy League institutions, and a few world-class ones, such as 1984 Olympian Pat Kennedy.
Clancy and Roddy plan to swim in college. Clancy is considering a U.S. service academy, such as the U.S. Naval Academy, and Roddy has committed to Towson University.
Swimming keeps them focused.
After spending more than 12 hours at school, Clancy and Roddy head home to eat dinner and complete homework assignments. They go to sleep close to midnight, only to wake up about five-and-a-half hours later and return to the pool.
“We’re tired, all the time,” Roddy said. “It’s worth it.”
Also see:
Inside Sports: NDP proves its A conference caliber
Inside Sports: No bumps for Seton Keough Field Hockey
Inside Sports: Reif cup honors Curley coach, Calvert Hall parent
Inside Sports: John Carroll’s marching band plays, and practicies, hard
Inside Sports: Elli Gonzalex a national-class runner at Catholic High
Inside Sports: Spalding’s broad-based program decades in the making
PrevNext