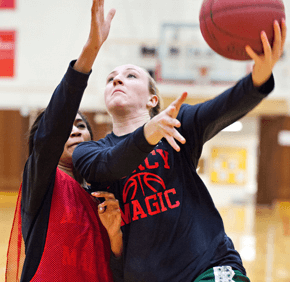 By Elizabeth Lowe
elowe@CatholicReview.org
During a recent varsity basketball game at Mercy High School in Baltimore, Mary Ella Marion stood in a gymnasium doorway and observed the action from afar.
Her vantage point was vastly different from where she watched the Magic for the past 30 years – courtside.
For the first time since the 1986 season, Marion is not coach of the Mercy varsity.
“It was time for a change, for a new voice, a different direction,” said Marion, a physical education teacher and Mercy’s athletic director for the better part of two decades. “I’m still very passionate about the sport. I want them to do well.”
Mary Ella Franz Marion has long been a part of Baltimore’s basketball fabric.
In middle school, she played Catholic Youth Organization ball at St. Pius X in Rodgers Forge. She played varsity for three seasons at Mercy, then for four at what is now Loyola University Maryland in Baltimore.
Marion was all of 25 when she returned to Mercy, seven years after her graduation, to take charge of the junior varsity. She became the varsity coach during the 1985-86 season.
Watch a video.
Marion’s early teams featured Rosemary Kosiorek Meyer, who went on to stardom at West Virginia University, where she was honored as the nation’s top collegiate player under 5 foot 5 inches. In 2007-08, her seniors included Jessica Zikorus, whose father, Dave, is Mercy’s first-year coach. In 2008-09, Marion’s seniors included her daughter, Maggie.
“She brings a love of the school and a passion for what she does,” said Meyer, a member of the school’s board of trustees, “whether it’s coaching or advocacy for the school or the athletic program. Her legacy is teacher, mentor, coach.”
Under Marion, Mercy won 389 games and Catholic League titles in 1986-87 and 1996-97.
Toward the end of her coaching career, Marion was diagnosed with breast cancer, but August 2013 marked two years since her final treatment. Marion, whose family includes husband Rich and their two sons, worships at St. Isaac Jogues in Carney.
Zikorus, the new head coach, was formerly an assistant to Marion. Competing in the Interscholastic Athletic Association of Maryland A Conference, Mercy has not won a game this season, but he said growth is occurring beyond the record.
“What we’re doing now are some internal things, character building,” said Zikorus, a parishioner of Sacred Heart in Glyndon and assistant varsity baseball coach at Loyola Blakefield in Towson.
“He is very passionate about the sport,” Marion said. “I’m definitely pleased with Dave as a successor. I have the utmost confidence in him.”
“We maintain the same enthusiasm and Mercy spirit that Mary Ella always had,” Zikorus said. “She (Mary Ella) has stepped away, other than (asking) ‘what do you need?’ She’s involved, but at an arm’s length.”
All Mercy students know they can reach out to Marion during the school day.
“I feel like I can talk to her (Marion) about anything,” said Lindsay Berg, a four-year varsity basketball player. “I’m really close to her; she’s friends with my family. We’ve seen her at her worst with cancer. She’s the teacher I go to when I need something.”
Still a fixture at home games, Marion cheers for the team when she isn’t operating the scoreboard. She is handling logistics at Towson University for “The Game” Jan. 31, the 48th annual showcase of the rivalry between Mercy and Institute of Notre Dame.
“It will be different,” Marion said, “but it will still be fun. Change is good.”
The Game
Mercy vs. IND
Jan. 31, 7 p.m.
Towson University, SECU Arena, Auburn Drive, Towson
$11 in advance at Institute of Notre Dame or Mercy, $13 at the door
Institute of Notre Dame, 410-522-7800; Mercy, 410-433-8880
Also see:
Inside Sports: St. Frances Academy grows its basketball legacy
Inside Sports: DeSales runners thrive in any environment
Inside Sports: No 4-0 for select Calvert Hall seniors
Inside Sports: Loyola’s water polo team flows into swim season
Inside Sports: NDP proves its A conference caliber
Inside Sports: No bumps for Seton Keough Field Hockey
Inside Sports: Reif cup honors Curley coach, Calvert Hall parent
Inside Sports: John Carroll’s marching band plays, and practicies, hard
Inside Sports: Ellie Gonzalez a national-class runner at Catholic High
Inside Sports: Spalding’s broad-based program decades in the making
PrevNext