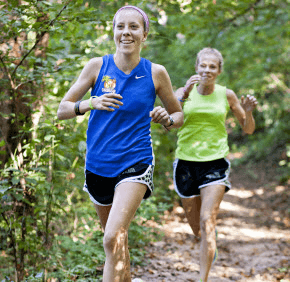 By Elizabeth Lowe
elowe@CatholicReview.org
Twitter: @ReviewLowe
For Elizabeth “Ellie” Gonzalez it isn’t a matter of whether she will run on a given day but when.
“It’s not maybe I will, maybe I won’t,” said Gonzalez, a senior at The Catholic High School of Baltimore. “It’s an assumed occurrence.”
The 17-year-old is one of the best runners ever out of the Interscholastic Athletic Association of Maryland and the Archdiocese of Baltimore. Gonzalez has gone as low as 4 minutes, 48 seconds in the 1,600-meter run. In late October she is favored to win her third straight IAAM cross country title.
“She’s a unique athlete,” said Kari McBride, Catholic High’s athletic director. “She’s different because she’s so driven, she desires to keep doing better. She wants to do the best, be the best.”
A parishioner of St. Michael the Archangel in Overlea, Gonzalez started running as a fourth-grader at her parish school, which she attended for K-8. She swam on a local summer team from ages 6 to 15, and she stopped running in middle school to pursue ballet.
When Gonzalez entered high school, she wanted to join a team sport and selected running. She’s run the 3,200 in 10 minutes, 38 seconds, and has come a long way since covering her first 5K, in 2010, in about 25 minutes.
“The first two miles were long,” she said. “The final mile passed by so quickly. I didn’t know what I was doing, but it was fun.”
“From day one I knew she was extremely talented,” said Cathy Kerns, Catholic High’s head cross country coach and a 2005 alumna of the school. “She was leaps and bounds above the (other) runners I had, even starting as a freshman.”
Spring track’s 1,600 is her favorite event.
“The mile, it’s the perfect amount of speed and endurance,” Gonzalez said. “It’s taken me three years to get down to the 4:50 range. Once you break five minutes, there aren’t many races where you go above that.”
Gonzalez excels at the sport, despite Catholic High lacking a track.
“We have plenty of resources available to us,” said Gonzalez, who trains and races at Herring Run Park and Lake Montebello, and does speed workouts at Archbishop Curley High School, all nearby.
Catholic High’s 10-girl cross country team includes her sister, Bridget, a sophomore. They are two of six siblings ranging in age from 7 to 19, who hail from a running family.
Their parents, Anibal and Carole, met at Mount St. Mary’s University in Emmitsburg in the 1980s, when it had an international profile in track and field, developing several Olympians, most notably Kenya’s Peter Rono, the gold medalist in the 1,500 meters at the Seoul 1988 Olympics.
Jim Deegan, the Mount’s coach emeritus, remembers Anibal’s middle-distance versatility, and Carole’s endurance. A generation later, her 10,000 best, 37:36, remains the third-fastest all-time at the Mount.
Ellie’s father is one of her coaches.
“Her greatest talent is that she’s a hard worker,” Anibal Gonzalez said. “She’s self-motivated.”
While her father helps plan her workouts, Ellie said it’s her responsibility to execute them.
“I have to be the one in the race pulling off the strategy,” said Ellie, who takes off the occasional day but doesn’t relish it. “It ruins the rhythms.”
Gonzalez works just as hard in the classroom as she does running.
During the 2012-13 school year, Gonzalez, who takes advanced placement and honors courses, ranked sixth in her class. She is a member of the National Honor Society, Spanish National Honor Society and theology club. She hopes to join the school’s piano ensemble.
Gonzalez is considering majoring in biology and minoring in romance languages. The colleges recruiting her include Brown University in Providence, R.I.; Cornell University in Ithaca, N.Y.; Dartmouth College in Hanover, N.H.; and Georgetown University in Washington, D.C.
“She’s the epitome of a Catholic (High) athlete,” Kerns said. “She does well in all aspects. She’s a leader, not only athletically but also academically. She’s the ultimate role model.”
Being a top ranked athlete has taught Gonzalez valuable lessons.
“It teaches you how to be poised,” said Gonzalez, who is as articulate as she is self-confident. “It forces you to lead because people look to you as a role model and expect certain things of you.”
Earning a spot on a future U.S. Olympic team is “on the horizon, but it’s a little far away,” Gonzalez said. “It has crossed my mind.”
Regardless of whether Gonzalez pursues any Olympic dreams, running is “a lifetime thing,” she said. “It’s such a large part of my life.”
Also see:
Inside Sports: Spalding’s broad-based program decades in the making
PrevNext