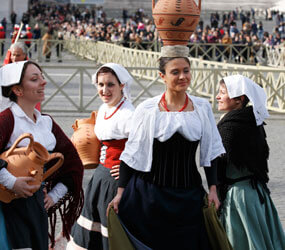 While the Christ child born in Bethlehem seems weak and fragile, in reality “he has the power to give the human heart the greatest and most profound joy” in the world, he said.

The babe in the manger, he said, represents “the stupendous reality that God knows us and is near, that his grandeur and strength do not follow the logic of the world, but the logic of a defenseless baby whose only strength is the love he entrusts to us.”

The pope made his remarks at a Mass in St. Peter’s Basilica Jan. 6, the feast of the Epiphany, which marks the manifestation of Jesus as savior to the world.

In his homily, he asked people to reflect upon why there always seem to be so few people who believe in Jesus Christ.

Just as after Christ’s birth many people witnessed the star of Bethlehem, but only few – like the Wise Men or Magi – actually responded to God’s invitation to follow a new path that would change the world, he said.

“What is the reason that some see and find (Christ) and others don’t? What opens one’s eyes and heart? What is lacking in those who remain indifferent, those who know the way, but do not take it?” he asked.

People do not accept Christ’s invitation to come to him when they are too self-assured and display the “pretentiousness of understanding reality perfectly well and the presumption of already having come to a definite judgment about things, which makes their hearts closed and insensitive to the novelty of God,” he said.

People need to let themselves be completely bowled over by “the adventure of a God that wants to come to them,” he said.

What is missing in the world, he said, is authentic humility and courage, which allow people to recognize and put their trust in what is truly great, “even if it is manifested in a defenseless baby.”

The capacity to be surprised, to be a child at heart, is missing, said the pope. Only when people use that sense of wonder to come out of their shell can they “follow the way indicated by the star, the way of God.”

The pope said by bringing gifts fit for a king and prostrating in adoration, the Magi demonstrated their willingness to submit to the authority of the Christ child – the king of the Jews – and renounce their allegiance to the cruel and powerful sovereignty of King Herod.

“They were led to also follow the way of the child, which would make them ignore the great and powerful of this world and would bring them to the one waiting among the poor, to the path of love, which is the only thing that can transform the world,” he said.

After the Mass, Pope Benedict gave his noonday Angelus address from his studio window to those gathered in St. Peter’s Square. He dedicated his remarks to the Magi who were guided to Bethlehem by a star and who were the first to come and adore Jesus.

He said the three men of learning and science are excellent examples of “authentic seekers of the truth” and of “the unity between intelligence and faith.”

Far from believing that the knowledge gleaned from books and scientific research was sufficient, they were “open to further revelations and divine summons. In fact they were not ashamed to ask for guidance from Jewish religious leaders,” he said.

They could have, but didn’t, exhibit the fear evident today of any “‘contamination’ between science and the word of God,” said the pope.

They listened and welcomed divine prophecies and embodied “a perfect harmony between human research and divine truth, a harmony that filled the hearts of the authentically wise men with joy.”

Pope Benedict asked that people let themselves be open to Christ and strike an even greater harmony in their lives between “reason and faith, science and revelation.”

The pope also extended a Christmas greeting to Eastern Christians who follow the Julian calendar and were preparing to celebrate the birth of Christ Jan. 7.