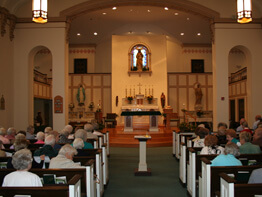 During the Year of St. Paul, which concludes June 28, 2009, pilgrims who visit St. Paul in Ellicott City may obtain a special plenary indulgence (remission before God of the temporal punishment of sin).

To obtain the indulgences, pilgrims must go to confession, receive Holy Communion and recite the Our Father and the Creed. They must also offer prayers for the pope’s intentions, take part in a sacred function or a pious public exercise honoring St. Paul and piously visit St. Paul in Ellicott City.

“It’s a fantastic gift for our parish and the people of the archdiocese,” said Father Matthew Buening, administrator of St. Paul. “God’s love is indulgent and indulgences are a way of encountering the love of God which is so much more than we can imagine.”

Father Buening explained that there are two parts to sin: guilt and temporal punishment. An indulgence remits temporal punishment after the guilt of sin has already been forgiven, he said. It helps free a person from the repercussions and attachments to sin.

The parish is offering numerous spiritual programs to help people grow in faith during the Pauline Year designated by Pope Benedict XVI.

Father John McMurry, S.S., is speaking on “St. Paul: His Life and Letters” following the 8 a.m. Mass every Thursday through Nov. 6. “I Paul,” a one-person play, will be presented Nov. 16 at 7 p.m., and Father Buening will give a November Bible study focused on St. Paul’s Letter to the Romans.

A retreat will be offered Jan. 24 at an area movie theater, and Archbishop O’Brien will celebrate a Mass at St. Paul Jan. 25 at 11:30 a.m. during which he will bless an image of the saint. The parish is also extending its confession schedule during the Pauline Year, offering tours of the church and providing special opportunities for Mass and eucharistic adoration.

Busloads of pilgrims have already started visiting the parish, Father Buening said, and he is anxious to welcome even more.