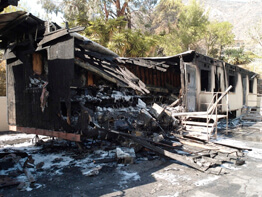 SAN DIEGO – A Catholic church on an Indian reservation was one of the casualties of the ongoing wildfires that have hit Southern California.

St. Bartholomew Church, a mission church on the Rincon Reservation, and several homes on the reservation were destroyed in one of the fires, according to Bo Mazzetti, a councilman for the Luiseno tribe on the reservation.

He told the San Diego Union-Tribune daily newspaper the loss of the church was a spiritual blow to the tribe. “That’s something we’ve all attended, that church. It’s devastating to see that,” Mazzetti said.

The St. Bartholomew Church property is owned by the Luiseno tribe, not by the Diocese of San Diego, although a deacon or priest from a nearby parish regularly ministers to reservation residents. The same is true of two other mission churches on reservations close to the Rincon Reservation, both of which were feared destroyed in the blazes.

A representative of Catholic Mutual, the San Diego Diocese’s insurance company, said Oct. 24 no harm had come to any church properties owned by the diocese.

A message left Oct. 23 on the answering machine at San Rafael Church in the city’s Rancho Bernardo area said: “Due to the fires in San Diego, San Rafael Parish offices and premises have been evacuated until further notice. All scheduled activities for this week have been canceled. Thank you.”

“Catholic Charities is providing support to the community and our staff affected by the wildfires with hot meals, staffing and technical resources to those located at Qualcomm Stadium,” a football stadium in San Diego doubling as a shelter, said Catholic Charities USA spokeswoman Shelly Boryszewicz in an Oct. 24 statement. Priests were being recruited to go to the stadium and minister to those taking refuge there.

The Diocese of San Diego shut down its chancery building Oct. 23, but reopened the next day, albeit at about 60 percent strength as employees were tending to fire-related situations in their homes.

The Catholic-run University of San Diego announced Oct. 23 it was canceling classes for the remainder of the week.

“Dining services staff and student volunteers have provided desperately needed food and supplies to evacuees at Qualcomm Stadium,” said the university’s president, Mary Long, in an Oct. 23 statement.
The university’s Center for Community Service Learning was coordinating volunteer opportunities for students and staff.

The university’s Web site notified parents that, while the school was not in any physical danger from the fires, it was compiling a list of homes willing to take in students on a temporary basis.

“Parents and their students are encouraged to consider their options and make the decision best for them,” the Web site said. “Many USD faculty and staff have been affected by the fires and we are very understanding of these decisions.”

At Loyola Marymount University in Los Angeles, it was business nearly as usual.

“The closest fire to the campus is over 20 miles away in Malibu, and all of the other fires are much farther away. None of the active fires pose any risk to the campus,” the school’s Web site said. Should an evacuation be necessary, it added, the university has made arrangements with another college to temporarily shelter students.

St. Patrick Church in Carlsbad, in the San Diego Diocese, opened its doors Oct. 23 as a shelter, saying it could accommodate up to 200 people.

Fourteen different wildfires affecting nearly 330,000 acres have hit separate parts of Southern California stretching along the coast from Val Verde to San Diego and into northernmost Mexico as well as some inland areas. Only two fires covering a total of 979 acres had been completely contained, according to the National Interagency Fire Center’s Web site.

The Santa Ana winds that had been feeding the flames were believed to have peaked Oct. 23, although dry and windy conditions were expected to continue. Temperatures, which had reached highs in the high 80s and low 90s in many parts of the fire-stricken areas, were also expected to cool somewhat.

The next day, he signed a major disaster declaration for Southern California. The declaration will speed federal dollars to people whose property losses aren’t covered by insurance and will help local and state agencies pay for the emergency response.