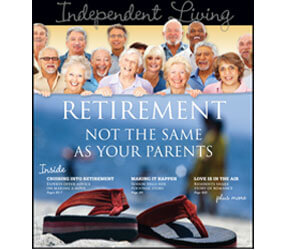 Sponsored by the Catholic Press Association of The United States & Canada, the awards recognize work done in 2009. They were announced June 4 at the New Orleans Marriott, during the CPA convention.
“Our archdiocese has been blessed for many years to be served by the finest diocesan newspaper in the country,” said Archbishop Edwin F. O’Brien, Publisher of The Catholic Review. “It is an affirmation of their professionalism and their valuable ministry to our local Church for them to be so recognized by their peers.”

“Hands down,” the judges noted in the former category, “a stunning publication that was smartly designed and packaged. Everything – from the handsome cover to pages of full-color advertising – ties into the content and theme of the issue: independent living. Of special note: the photography used to illustrate the stories and ads depict a diverse community, which welcome all who see it. The total package is so engaging that readers will want to spend quality time perusing the section.”

Matysek was the only newspaper writer honored in the Individual Excellence Writer/Editor category, earning third place for a body of work that included “Path to the Priesthood,” a three-part series on seminarians; reporting on Anglican sisters coming into communion with the Catholic Church; ongoing analysis of a Baltimore City bill that targeted pregnancy centers; and a feature on the 50th anniversary of the Barbie doll.

“The writer shows a breadth of ability in presenting styles which would appeal to a diversity of audiences,” the judges remarked. “The pregnancy counseling series is particularly compelling for being informative and for presenting the Catholic stand on an important public policy conflict.”

“Wow! Great graphics, Great color! Consistent message. Sometimes simple is the best! Easily a series of ads that your sales staff can continue to put in front of the advertiser.”

“Compelling well-cropped photos on the cover and throughout the special section make this regular special supplement stand out. The diverse mix of topics, combined with well-executed photography and on-point content make this section head of the class.”

The Review took second place in three of the four illustration categories for newspapers.

Photographer Owen Sweeney III was honored for “Homeless Find Hope in a Basket,” regarding a Catholic Charities program. Hornbeck was recognized for Original Illustration for her design of the Christmas Eve cover, which employed a work commissioned from artist Christian Slade. Hornbeck and Sweeney were honored for Chart or Information Graphic, for the center spread in the Cathedral of Mary Our Queen 50th Anniversary Commemorative Edition.

That section earned another second place, for One Time Special Issue.

“A touching story, the initial link to the Thanksgiving tale,” the judges noted. “I read several of the posts and all were well-written, the site clean and clear. I enjoyed the writer’s voice here, the small stories with greater meaning.”