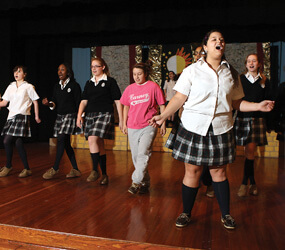 A moment of realization will wash over unsuspecting audience members as the curtain peels back on the Institute of Notre Dame’s staging of “Joseph and the Amazing Technicolor Dreamcoat” April 3-5.

Even though most will be aware they are in an all-girls institution, the natural thought would be a local male student would play the titular Joseph and the other male roles.

IND, however, has taken the gamble on its own student population.

Director Carolyn Buck, the Baltimore school’s drama department chair and English teacher, made the decision to go with an all-female cast during December auditions.

“Since we are an all-female school, students have often said to me, ‘Why give such plum parts to the boys since we have such fabulous talent here?’ ”

Ms. Buck answered by awarding every part to an IND student.

Junior Valarie Cook had her eyes on the role of Narrator when the show was casting. It was a role traditionally played by a woman. But Ms. Buck and musical director Dan Meyer unexpectedly asked her to sing some parts of Joseph. Suddenly, she was going to take on one of Broadway’s biggest parts – a male role, no less

“I was really happy. I’ve never been the lead before, so this was a real ego-booster that I must be doing a good job,” she confessed. “This is my first male role. I’m trying to get the man on. Sometimes it’s hard because I think, ‘A guy would stand that way,’ or ‘A guy wouldn’t do that.’ I feel like a guy.”

Students have passed Valarie in the hallway, jokingly calling her “Joe.”

IND students have played male parts in the past. Mr. Meyer, who has played Joseph elsewhere, said he had to tweak vocal arrangements to suit the female voices.

“I am most excited to see the creative energy the students bring to the production,” he said. “The mission of our school includes creating active leaders and the musical is a very visible manifestation of that.”

Senior Chelsea Cansestraro, playing the Narrator, has portrayed male characters at IND in the past. She said an actor has to disappear in the role.

“Just the way they act and speak, you can’t be too girly and be a guy at the same time,” Chelsea said. “You have to portray that whole character and become that person.”

“I have given the girls movements that convey ‘fraternity,’ ” she said.

The show is based on the Genesis tale of Joseph, who was sold by his brothers, jealous of his many-colored coat. Joseph rises through Egypt’s ranks and is eventually reunited with his heartbroken father.

Staci D’Addarro, playing forlorn father Jacob, ran through several emotional numbers with the cast during a March 25 rehearsal. The only missing ingredient was the show’s other star – the dreamcoat. It was still being assembled.

Staci, a senior, said she has learned to act like a boy by hanging with male friends through the years.

“This is going to be real cool,” Staci promised.