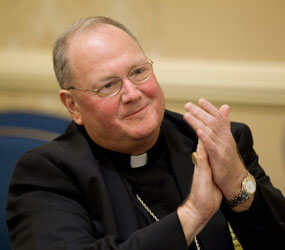 New York Archbishop Timothy M. Dolan was as surprised as anyone that he was elected president of the U.S. Conference of Catholic Bishops Nov. 16.

“I’m surprised, I’m honored, I’m flattered and a tad intimidated,” Archbishop Dolan told Catholic News Service shortly after being elected in an unprecedented departure from the USCCB’s normal tradition of electing the conference vice president to the presidency.

The vote occurred in Baltimore, where the bishops are holding their fall general assembly.

He said he had no idea what was behind the bishops’ 128-111 third-ballot vote to make him president instead of current vice president Bishop Gerald F. Kicanas of Tucson, Ariz.

The election of Archbishop Dolan marks the first time since the bishops’ conference was reorganized into its current form in 1966 that a sitting vice president who sought the presidency did not win the election. In two elections, circumstances dictated that the vice president did not rise to lead the conference.

In 1974, St. Paul-Minneapolis Coadjutor Archbishop Leo C. Byrne, vice president since 1971, died less than a month before his term ended.

Three years later, Cardinal John J. Carberry of St. Louis as vice president declined to run for the top spot because he was 73 years old and was due to retire before he could complete a three-year term as president.

A sampling of bishops interviewed after the vote suggested the choice of Archbishop Dolan seemed to be more about changing the process of assuming the vice president would be elected president.

Bishop Roger P. Morin of Biloxi, Miss., said it was his sense that “there’s been some question as to whether the vice president should automatically be elected … and that the election was more about that principle.”

Archbishop Dolan said amid public criticism in recent weeks of the long-held election process, he suspects bishops had begun to “bristle” a bit at the notion that they were not electing a president on his own merits, but by virtue of the office he’d held for three years.

He added that the vote “was hardly a landslide,” and that he doesn’t think it was a personal reflection on Bishop Kicanas.

Archbishop Dolan, 60, said he’s a bit daunted to be following Cardinal Francis E. George as conference president because of his predecessor’s skill in the position. He takes office at the end of the bishops’ meeting Nov. 18.

He said several times that he doesn’t see the role of president as “bishop of the bishops,” but as someone who is there to serve the interests of the bishops.

In an interview with Telecare, the Rockville Centre, N.Y., diocesan television station, Archbishop Dolan called his election “a humbling moment.”

“I was very grateful (to be elected). It was unexpected. There were 10 candidates. The posture of the bishops, of course, is you don’t really run for office, you run from it,” he said with a laugh.

“Our major focus, our major drive is our dioceses,” Archbishop Dolan continued.” We love the conference. We respect and appreciate it. We are so immersed in our dioceses most of us say we have our hands full at home” yet still offer to do something to help the conference when needed.

Archbishop Dolan joked that he had to make a few promises to gain votes, including providing doughnuts for the coffee break. But, he added, “This is what service to the church is all about. … You make yourself available.”

The New York archbishop said one regret about his election was having to step down as chairman of the Catholic Relief Services board of directors. As USCCB president, he will appoint his successor.

He said the CRS work had “enhanced my major duties” as archbishop of New York by “calling me beyond” local concerns to the needs of the larger world.