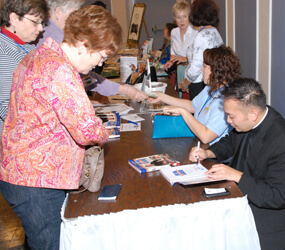 Martha and Mary would have felt at home with the 300 women gathered at the feet of a fleet of teachers at the first Illuminate Women’s Conference Oct. 10, held at St. John Parish in Westminster.

Organizers from Archdiocese of Baltimore parishes planned the conference to energize women from the region to carry their new devotion back to their families.

The conference goals resonated with the attendees.

“Our souls needed fed,” said Kim Sullivan of St. Isaac Jogues in Carney, who came to the conference with a friend and fellow mom. “What I want to take home is more spiritual guidance.”

Father Leo E. Patalinghug, in the opening “teaching” Mass, said women should live to claim their unique role of receptivity to God’s message.

Father Patalinghug, director of pastoral formation at Mount St. Mary’s Seminary in Emmitsburg, noted the seated posture during the liturgy of the word is “like that of Mary and Martha listening to the words of Jesus.” Receptivity to God, he said, was modeled by Mary and is a gift women bring to the church.

“Women pray differently,” he said. “They pray in a way that receives the Lord; you welcome the love of your spouse, your family, and it is the natural gift of womanhood that John Paul II called ‘feminine genius.’”

“I loved the teaching Mass, I’ve never seen anything like it,” said Donna Tafuri, attending from St. Augustine in Elkridge.

Basic Catholic instruction was a goal of the conference, according to Jeanne Link, chairperson of the organizing committee.

Following the Friday opening with Catholic instructors, Link said, a wide range of speakers and workshops was offered throughout Saturday. Other goals included nurturing women and providing a place to feel free to use their voice.

“Women in this economy and society,” Link said, “are the foundation of the family. Kids look to the moms for support, there are job losses to deal with and all the other things that women deal with in silence.”

Nationally known Catholic comedienne Judy McDonald had the group howling Friday night over jokes about Lent and Sunday candy; locating single Catholic men by the ashes on their foreheads; and a pope who wears an iPod.

“She was great, she was calling us on everything,” said Patty Stroble of St. John the Evangelist in Hydes.

“It makes it very special when we are all women, because the stories and jokes can be made for women and we all understand them,” said Amy DeCarlo, of St. Peter the Apostle in Libertytown.

“If you’ve talked to Jeanne (Link), you can understand all the prayer, great work, and volunteers that made this come to fruition,” he said.

The planning team came from parishes in Anne Arundel, Harford and Howard counties, and ranged in age from 23 to 73.

Though the conference did not reach its goal of 1,000 attendees, the organizing committee plans to grow it as an annual event in the region.