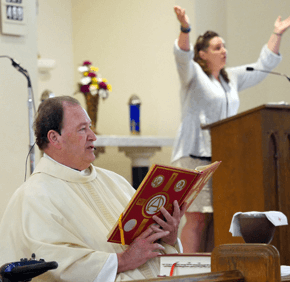 ESSEX – “How many of you have had a hip replacement?

“How many have had a knee replacement?”

After five months of being unable to lead a liturgy for his parish, Monsignor Robert L. Hartnett applied a sharp sense of humor to his return to Our Lady of Mount Carmel the last weekend in April.

His status didn’t seem a laughing matter, but wit, as much as wisdom, is part of the healing process for the veteran priest.

Monsignor Hartnett, who turned 62 June 2, took ill last autumn with infections in both feet that lingered. In early March, he underwent an amputation below his right knee. He is fitted with a prosthesis, following doctor’s orders and working for the day when he can climb the five steps from the end of the main aisle to the altar.

For now, he celebrates the Eucharist from a wheelchair, an arm’s reach from helpers in the first pew. It is not ideal, but it is liberating, after repeated stays at MedStar Franklin Square Medical Center, rehabilitating at MedStar Good Samaritan and being cooped up in the rectory.

“It was tough, especially the time spent in the hospital,” Monsignor Hartnett said. “Three weeks the first time, two weeks the second time. It was very restrictive. I was going crazy. … I couldn’t stand being dependent on people to get me to a wheelchair to get around.”

Rely on others, however, he, his eastern Baltimore County faith community – and, more frequently, others in the Archdiocese of Baltimore – must.

Monsignor Robert L. Hartnett, pastor of Our Lady of Mount Carmel in Essex, uses a wheelchair during the recessional after celebrating noon Mass May 17. He had his right leg amputated below the knee in early March. (Karen Osborne/CR Staff)

The archdiocese is in the midst of an ongoing parish planning process, driven in part by a dwindling number of priests (see sidebar below story).

That shortage is exacerbated when a priest takes ill – which some choose to work through.

He celebrated Christmas Eve midnight Mass using a walker, but three weeks later was in “excruciating” pain and underwent a second surgery, this one lasting 10 hours. Ramps allow him to take his wheelchair to the altar, where he said he perches “up on a barstool.”

He tended to administrative duties through two rehabilitation stints, the first at a facility in Annapolis, the second in Arnold. Dee Wittschack, the parish secretary; her husband, Fred, its bookkeeper; and Jennifer Ulrich, his housekeeper, ferried necessary paperwork that Father Logue couldn’t handle on his cell phone and laptop.

“It was a long, boring process,” said Father Logue, a 67-year-old native of Catonsville. “I would do therapy exercises for one hour a day. Just because I can’t move, it doesn’t mean my brain doesn’t stop functioning.”

His parish of 800 families still needed help with liturgies.

“Father Jude Okoye had worked for the Little Sisters of the Poor,” Father Logue said. “He needed a place to stay and we needed a priest.”

Father Okoye, from the Diocese of Awka, Nigeria, has been in residence at the southern-most parish in the archdiocese since the second week of September 2014. Its members, meanwhile, responded to bulletin requests seeking drivers to transport Father Logue to medical appointments.

“Our parishioners are extremely gracious,” he said. “Those people stood by me through all my operations. They’ve been very much a part of the recuperative process.”

When Father John A. Williamson underwent cancer treatment in 2010 and again in the winter of 2013-14, he never took formal leave from Ascension in Halethorpe or St. Augustine in Elkridge, the two parishes he pastors.

“There were a few weeks at a time in the hospital during which we relied heavily on text messaging,” he said, “so that I could still be directing things. The entire staff picked up the slack.”

Substitute priests included Monsignor James W. Hannon, director of the archdiocesan Division of Clergy Personnel. Since last August he has also helped fill the void in the Seton Vicariate left by the departure of Bishop Mitchell T. Rozanski for the Diocese of Springfield, Mass.

On the administrative front, Our Lady of Mount Carmel was fortunate in that it is one of only two parishes in the archdiocese with a high school.

“Kathy Sipes (the school president) made sure some of the liturgy happened,” Monsignor Hartnett said. “Karen Weber, our business manager, picked up part of my responsibility. She had to make some independent decisions (when) I could not. Money, how that was distributed and evaluated, fell to Karen.”

Monsignor Hartnett took ill just as the parish was beginning some major improvements, including new paint, carpeting and lighting for its church interior, and new doors for its exterior entrances.

“A lot of that was kind of left to me,” said Weber, who has worked for the parish for 20 years. “It was a pretty good challenge. Believe me, he (Monsignor Hartnett) was consulted. My husband, Carl, and I would take carpet samples and paint chips to him so he could see the options. He wasn’t here physically, but we talked quite a bit.

Weber mentioned an initial shipment of lights that arrived broken, which meant that the replacement batch wasn’t installed until after Christmas.

“I’m sure it was all worse for him (Monsignor Hartnett) than it was for us,” she said. “Now, he is able to get out of the rectory, and do the things he enjoys here on campus. Ballgames, social events, visiting with our students and children, he didn’t have the opportunity to do all that this year.”

“People called me, and I couldn’t get over to celebrate Mass,” he said. “I instructed them to do the Sunday celebration without a priest, basically a Scripture service and distribution of holy Communion, which I think was frustrating for everyone. Everyone came, expecting Mass.”

Monsignor Hartnett has a unique perspective on the clergy crunch.

In 2005, when he underwent triple bypass heart surgery, he relied on a circle that included Monsignor Hannon and other priests. Two are now retired, another is about to, and another, Monsignor F. Dennis Tinder, died in 2009.

The deceased clergy that same year included Father Joseph Kitko, a retired but very active priest who had been in residence at Our Lady of Mount Carmel.

Weeks before he took ill last November, Monsignor Hartnett gave the homily at the funeral Mass of Deacon Charlie Baynes, who had served Our Lady of Mount Carmel and St. Joseph in Fullerton before dying unexpectedly.

Father Michael Triplett had been associate pastor of Mount Carmel until January, when he left to become administrator of Our Lady of Grace in Parkton. A permanent replacement didn’t come until March.

Father Patrick E. Besel was moving to Mount Carmel when he got wind of Monsignor Hartnett’s amputation. He ministers to Franklin Square Hospital and the parish of 2,700 families, which has approximately 100 funerals a year.

“During my absence there were weeks with four funerals,” Monsignor Hartnett said. “Daily Mass, a funeral, sometimes a second funeral … it’s pretty demanding for one guy to handle that load.”

Father Jesse Bolger and Deacon Paul Mann of St. Clare, and Father Kevin Mueller of Our Lady, Queen of Peace in Middle River, are among those who have helped Our Lady of Mount Carmel, which shares some liturgies with its neighbors.

There were still weekends when Father Besel took all four weekend Masses, he said, “because I wanted to get to know the people.”

He and Monsignor Hartnett are learning to lean on one another, with no small irony. From March to October 2014, Father Besel was on a leave of absence himself, treating what he described as a “severe episode” of depression.

“I learned the hard way,” Father Besel said, of the demands of his vocation, “that the most difficult thing to say to the archdiocese or a supervisor, is ‘no.’ You’ve got to know your limits, take care of yourself, but it’s hard, because there are things you want to do.

“I worry about the younger guys. How are they going to handle the pressures?”

Monsignor Hartnett has a shtick in which there is a give-and-take ribbing of his associate at the start or end of Mass. It is a good act, as Father Besel said the pastor canceled a planned retreat this week so that he could take some time off.

The pastor has already had plenty of time for reflection.

Monsignor Hartnett said that Sipes, the high school president, found him near incoherent in the rectory last Dec. 6. Three days later, during a surgery to remove a toe on his left foot, an even more serious infection was found on his right foot. In early March, his right leg was amputated below the knee.

Prayers included those of Monsignor Hannon; they met as high-schoolers in the late 1960s.

“It was comforting, having a friend handle the clergy personnel side, although he would do for any priest the things he did for me,” Monsignor Hartnett said. “He agonized over some of these things, as I did, especially when it came to the amputation. He was really concerned about how I would respond to that.

“I didn’t have the same concern.”

Monsignor Hartnett was diagnosed with diabetes 20 years ago, and the heart surgery a decade ago was an even starker reminder of his mortality. He has lost loved ones, and, counseled parishioners with issues “far greater.” This, he said, is another opportunity “to recognize a new reality and embrace that.”

“This is an opportunity to penetrate the mysteries of God a little more deeply,” he said, “to try to recognize God’s work and presence, even in the midst of those obstacles. What is this new situation calling me to? What does (it) require of me? Given my relationship with God and what I espouse as a Christian and as a disciple … ”

As Grace, his 19-month-old whippet, circled his wheelchair in the parish office, Monsignor Hartnett grew even more reflective.

“There are people who have been in horrendous situations, who have endured horrendous things,” he said. “They have still been able to give their life to God and serve Christ. … If people who are challenged directly about their faith can overcome those challenges and embrace Christ more deeply, how could I not?

Editor’s note: Paul McMullen is a parishioner of Our Lady of Mount Carmel in Essex.