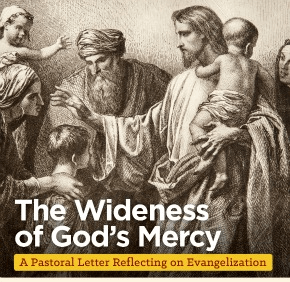 SPRINGFIELD, Mass. – Springfield Bishop Mitchell T. Rozanski issued an invitation and a challenge in his new pastoral letter, “The Wideness of God’s Mercy,” released Feb. 10, Ash Wednesday.
In it the former auxiliary bishop of Baltimore offers words of welcome and notes that the letter was inspired by the Jubilee Year of Mercy declared by Pope Francis. He also said it was a direct response to the people of the Diocese of Springfield.
“When we began this process of looking at our evangelization, one of the suggestions was to reach out to people – both those who are in the pews and those who are Catholics but not practicing their faith,” he said. “We wanted to ask them different questions about their perceptions of the faith or perhaps why they don’t practice.”
More than 3,000 people took the diocese’s online survey and many wrote comments. Bishop Rozanski said he wanted to assure those people that they had been heard.
“There are many people hurting in our Catholic community from the pain caused by our past failings as a diocese, as well as the grievous actions of some who ministered in our church,” he wrote in his pastoral letter. “The reality of that pain is that it still echoes many years later.”
He added, “Before I ask anything of you, let me as your bishop be the first to apologize and ask your forgiveness.”
He said he was sorry for any pain caused by parish and church closings, the sexual abuse scandal and any other occurrences. He noted that most people encounter church on the parish level and that more effort must be made to make people feel welcome and accepted.
In the letter, he quoted one survey respondent who wrote: “People need to feel involved. It has to be more than just repeating the Mass ritual week after week. You need to feel a connection to God and the parish. You need to feel that it’s important to be there, that someone notices when you aren’t.”
“The pastoral letter is, for me, the lynchpin for all of our parishes as to how to make a pastoral response to the survey,” Bishop Rozanski said in an interview with iobserve, a website of the Catholic Communications Corp. serving the diocese.
He added, “What the pastoral letter also does is issue challenges to our parishes to say, ‘These are some of the comments that people have made. Now it’s our turn to think of creative ways – how do we address those comments? How do we address those different situations that people face that may prevent them from coming to church?’”
Bishop Rozanski stressed the urgency of addressing such issues in the pastoral, writing: “We must be open to self-examination and change; business as usual will no longer work or be acceptable.”
He said that he looks to Pope Francis as an inspiration and an example of how to reach out.
“As our society has changed, it’s not enough to say, here’s a church, here’s a parish center and we expect people to come and fill them. Pope Francis tells us we can’t stay behind the walls of our churches or of our rectories or our parish centers, but rather we need to reach out. This is a different era; this is a totally different era.”
He also said that evangelization is not a one-time effort, not just another program. “It must be the mission of the church from its beginning until the time when Jesus comes again.”
He concluded in his letter, “Understandably, this is a daunting task, but one we must challenge ourselves to undertake. We must make our parish communities places where people want to worship, meet Jesus and form community. We must put the love of God foremost in all of our efforts. We must walk beyond our parish boundaries without fear, to demonstrate the faith we celebrate in liturgy takes form in the reality of the world around us.”