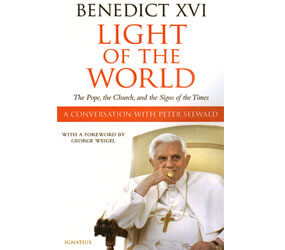 VATICAN CITY – In a new book, Pope Benedict XVI said that his trip to the United States “revitalized the positive energies of the faith” at a time when the clerical abuse scandal was back in the headlines.

In the book, “Light of the World: The Pope, the Church and the Signs of the Times,” the pope was asked about visiting the United States in 2008 when “the fallout from the abuse scandal occupied center stage.”

“I think even non-Catholics were surprised that the visit was not some kind of challenge,” the pope responded.

“It revitalized the positive energies of the faith and touched everyone who was present. Wherever the Pope went, there were countless people, and there was a joy of being Catholic in the air that was quite incredible,” the pope said.

The pope said that at every appointment on his trip, including the liturgies in New York and Washington, there was “joyful participation, a sense of closeness, of communion, that touched me greatly.”

Peter Seewald, the German writer who conducted the interview in July, also asked the pope, “Has the Catholic Church in the United States already surmounted the crisis?”

But, he said, the crisis made the Catholic Church in the United States “aware of its fragility and of the problems and sin that are present in it. This is very important. In addition, there is an internal awakening to the need to overcome all these things and to live out and embody Catholic identity in new ways in our time.”

The pope said that during the trip, he also had a chance to speak with victims of clerical sex abuse.