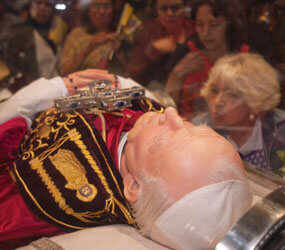 MEXICO CITY – Julian Salvador and his wife, Paola Rivera, hold fond memories of Blessed John Paul II. The couple saw him during his inaugural visit to Mexico City in 1979.

“It was the most beautiful thing and incomparable to anything I’ve ever experienced,” Rivera recalled.

Holding onto memories and candles, they prayed the rosary Aug. 24 outside the papal nuncio’s office in Mexico City. Inside was blood drawn from Blessed John Paul shortly before his death. It was there to be venerated and taken to the Basilica of Our Lady of Guadalupe following day.

Later, it will be taken to all of the country’s dioceses as part of a pilgrimage of peace.

Peace in Mexico was on the minds of Salvador and Rivera as they prayed with approximately 100 others on a cool evening.

“(We’re) praying that it quiets down, that there’s peace. It’s important that it (peace) returns to this country,” Salvador said.

“We’re praying for a miracle,” his wife added.

Salvador and Rivera came to pray for peace in a country where drug violence has claimed more than 40,000 lives since December 2006. The church has confronted the challenges of ministering to populations in violent pockets of Mexico and fending off allegations that cartel kingpins – who are often described as religious – have laundered money through collection plates.

Census data shows the number of Mexicans declaring themselves Catholic has declined, reaching 84 percent in 2010.

That the Mexican bishops’ conference would request relics of Blessed John Paul’s blood be sent to Mexico at such a troubled time failed to surprise some church observers, especially given the late pontiff’s enormous popularity and feeling of kinship with the faithful in what had been a country – like his own – where Catholics were persecuted for their faith during the last century.

“John Paul II is a Mexican hero,” said commentator and church observer Bernardo Barranco. “No other person in public, political or social life of the country has had the impact that John Paul had during his five visits to Mexico.

“He’s a key person in the contemporary life of this country,” he added.

Cardinal Norberto Rivera Carrera of Mexico City mentioned the same thing during Mass at the Basilica of Our Lady of Guadalupe, where many celebrating the service waved paper flags with Blessed John Paul’s image and chanted, “Viva!”

“He was our Mexican pope,” the cardinal said. “We feel very privileged to have (these relics) here.”

Cardinal Rivera focused his homily on promoting peace through strengthening families, saying it was an important topic for Blessed John Paul.

“The main base and the cradle of peace is the family,” he said.

Blessed John Paul made Mexico a priority during his papacy, Cardinal Rivera said. The last of his five visits, in 2002, resulted in the canonization of St. Juan Diego, the first indigenous saint of the Americas.

The visits began under less favorable circumstances as Mexico and the Vatican were officially estranged and anti-clerical laws – so strict that priests and nuns were forbidden to wear habits – were still on the books.

Blessed John drew an estimated 20 million visitors during his first visit and paved the way for the restoration of church relations with the Mexican state in 1992.

Those outside the nunciature and at the Mass expressed their feelings about venerating the relics.

“This is a country deeply rooted in faith,” said retiree Patricia Ayala.

“This is about faith, about hope,” said banker Ernesto Rowe as he used his phone to take photos of a replica of Blessed John Paul and the glass container of blood. “Maybe we don’t demonstrate (our faith,) but it’s there.”