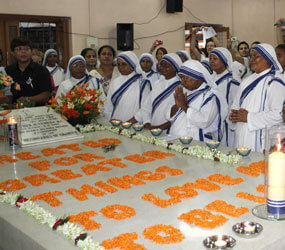 VATICAN CITY – Blessed Teresa of Calcutta is “an exemplary model of Christian virtue” who showed the world that an authentic love for others opens the door to knowing and being with God, Pope Benedict XVI said.

Marking the 100th anniversary of her birth, the pope sent a message to Sister Mary Prema, the superior general of the Missionaries of Charity, the congregation Mother Teresa founded in 1950.

The Vatican released the message Aug. 26 after it was read in Calcutta, India, at the end of a special Mass commemorating the 100th anniversary of Mother Teresa’s birth.

In Calcutta, most of the Missionaries of Charity nuns gave up their regular seats in the motherhouse chapel to accommodate hundreds of pilgrims and volunteers who arrived for the early morning Mass.

After the Mass, the bishops, priests, nuns and visitors processed to Mother Teresa’s ground-floor tomb. Sister Prema handed Cardinal Telesphore Toppo of Ranchi a lamp, and he lit a candle to mark the beginning of the centenary celebrations.

Dozens of Missionaries of Charity novices gathered around the tomb and sang “Happy Birthday.”

In his message, Pope Benedict said celebrating Mother Teresa’s birth centenary “will be for the church and the world an occasion of joyful gratitude to God for the inestimable gift that Mother Teresa was in her lifetime, and continues to be through the affectionate and tireless work of you, her spiritual children.”

The pope said Mother Teresa was a living example of St. John’s words: “Beloved, if God so loved us, we must also love one another. No one has ever seen God. Yet, if we love one another, God remains in us, and his love is brought to perfection.”

He asked the order’s sisters, brothers, priests and lay members to let God’s love continue to inspire them to give themselves “generously to Jesus, whom you see and serve the poor, the sick, the lonely, and the abandoned” and to draw constantly from Mother Teresa’s example and spirituality.

After the visit to the tomb, Sister Prema read a message from the congregation, and the group processed to the motherhouse’s L-shaped courtyard. Sister Prema and Sister Nirmala Joshi, retired superior general of the order, released white pigeons and blue and white balloons amid cheers from those packing the balconies on the three floors surrounding the courtyard.

Similar events were planned worldwide, including at Washington’s Basilica of the National Shrine of the Immaculate Conception.

Archbishop Lucas Sirkar of Calcutta said anniversary celebrations being held throughout India had brought “a ray of hope and joy to thousands of poor, underprivileged, disadvantaged, and marginalized in India,” especially as the nation struggles with violence, injustice and natural disasters.

The events were receiving wide media coverage, which was helping make the Gospel message better understood in India, he said in an Aug. 26 interview with Fides, the news agency of the Congregation for the Evangelization of Peoples.