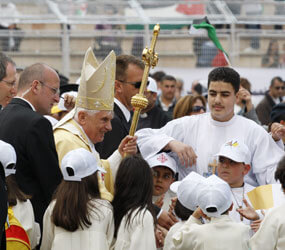 In a wider message to the troubled region, he insisted that religious values must have a decisive role in the societies of the Middle East, especially when it comes to healing divisions and promoting peace.

It was the 82-year-old pontiff’s first trip to an Arab country, the first portion of an eight-day Holy Land pilgrimage that would also take him to Israel and Palestinian territories.

He set the tone of his visit when he arrived at Amman’s airport May 8, saying he had come as a Christian pilgrim and expressing his “deep respect” for the Muslim community.

As King Abdullah II stood at his side, the pope commended Jordan for curbing extremism, protecting religious liberty and promoting “a better understanding of the virtues proclaimed by Islam.” He paid special tribute to interfaith dialogue initiatives launched by Jordanian leaders.

“We can say that these worthy initiatives have achieved much good in furthering an alliance of civilizations between the West and the Muslim world, confounding the predictions of those who consider violence and conflict inevitable,” he said.

The pope’s first stop in Amman was the Regina Pacis center, a church-run facility for the disabled, and it underscored the charitable role played by Jordan’s minority Christian population in cooperation with Muslims. Arriving to loud cheers, he waded into a huge crowd of well-wishers as a band played the “gerpe” – a Jordanian bagpipe – and tabla, or hand drums.

The following day, the pope visited the King Hussein Mosque in Amman, pausing briefly in what the Vatican called “respectful meditation in a place where numerous people also pray and meditate before God.”

In a speech afterward to Muslim academics and religious leaders, the pope said the new mosque, with its copper-topped dome and minarets, was among places of worship that “stand out like jewels across the earth’s surface” and point to the Almighty.

While underlining the common belief in God shared by Muslims and Christians, the pope also warned of the “ideological manipulation of religion” that can act as a catalyst for tensions and violence in contemporary societies.

Sometimes this is done for political reasons, in an effort to silence the voice of religion in the public sphere, he said. His point was that religion risks being marginalized if it is seen as a cause of divisions instead of a builder of harmony.

Another central theme of the pope’s speech was the need to “cultivate for the good, in the context of faith and truth, the vast potential of human reason.”

The relationship between faith and reason was the central issue in the pope’s 2006 talk at the University of Regensburg, Germany, a speech that offended many Muslims because it quoted a medieval Byzantine emperor as saying the prophet Mohammed had brought “things only evil and inhuman, such as his command to spread by the sword the faith.” The pope later clarified his remarks and apologized for the misunderstanding it caused.

In Amman, the pope’s host at the mosque event, Prince Ghazi bin Muhammad bin Talal, thanked the pontiff for expressing regret “for the hurt caused by this lecture.” He added that the Mohammed known, loved and emulated by Muslims “is completely and entirely different” from the “distorted” images often presented in the West.

The pope traveled May 9 to Mount Nebo, the place where Moses glimpsed the Promised Land before dying. From a windswept promontory, he looked out over a biblical panorama that stretched from the Dead Sea to Jericho across the Jordan River, with the hills of Jerusalem in the far distance.

Moses reminds people today that they “are part of the ageless pilgrimage of God’s people through history,” he said. Christians are asked in a special way to prepare for Christ’s kingdom through charity and service to the poor and by being agents of reconciliation in the world, he said.

The pope then rode his popemobile to nearby Madaba, an ancient Moabite city mentioned several times in the Bible. As he passed slowly along the dusty streets of the city’s Christian quarter, he was cheered by thousands of people who held flags, signs and photos of him.

There he blessed the foundation stone of the University of Madaba, the first Catholic university in Jordan. He said it was important for the church to demonstrate that belief in God does not suppress the search for truth – although he added that religion, like science and technology, can be “corrupted.”

“Religion is disfigured when pressed into the service of ignorance or prejudice, contempt, violence and abuse. In this case we see not only a perversion of religion but also a corruption of human freedom, a narrowing and blindness of the mind,” he said.

That evening, the pope received a tumultuous welcome at the Melkite Catholic Cathedral of St. George in Amman, where he encouraged the country’s Catholic minority to make its voice heard in public life and to join forces with Muslims when moral concerns cross religious boundaries.

Noting Jordan’s legal guarantees for Christians, the pope asked Catholics – especially the young – to take advantage of these opportunities.

“Do not be afraid to make your own wise, measured and respectful contribution to the public life of the kingdom. The authentic voice of faith will always bring integrity, justice, compassion and peace,” he said.

The pope’s Mass May 10 in an Amman soccer stadium that holds 25,000 people was the liturgical high point of his visit. In his homily, the pope preached as a simple pastor, recognizing the spiritual and material struggle of Christian families in the land where the church was born.

Christians in the Holy Land have a special vocation to engage in dialogue and build new bridges to other religions and cultures and to bear witness to the sacrificial love of Christ “and thus counter ways of thinking which justify taking innocent lives,” he said.

The liturgy coincided with the close of the year of the family in the Holy Land, and the pope made a point of thanking the many women in the region who have found “courageous ways” to protect families and build peace.

Later in the day the pope made his way to the Jordan River, where archeologists believe they have identified the site of Jesus’ baptism by St. John the Baptist. He blessed the foundation stones of two Catholic churches – one Latin rite, the other Melkite rite – to be built at the location and said the new construction was a hopeful sign for a Christian community that goes back to the church’s beginnings.

The papal events were broadcast on Jordanian TV, and the country’s media gave the visit wide coverage. A favorite image of the visit landed on the front pages of several newspapers: the smiling pope wearing around his shoulders a red-checkered “shmagh,” the official Jordanian head scarf.