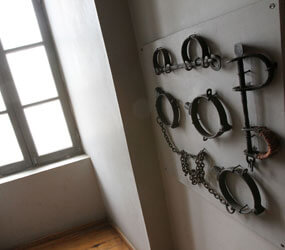 Visitors begin to look uncomfortable as sweat appears on their brows. A guide is about to make the tour more unbearable.

The guide pulls no punches in describing the conditions African men and women endured in this space before they were shipped off to the Americas as slaves.

The 17th-century castle stands as a memorial to the slave trade, its brutality and its impact on present-day Ghana.

African-American Bishop Martin D. Holley, an auxiliary bishop of Washington, said he felt a strong spiritual connection to the place.

“I cried,” he said after his visit there. “My ancestors obviously made it to the shores of America, but so many people did not.”

Bishop Holley said he felt humbled to return to “this place of my family and pray for those that didn’t make it and those who did.”

“I wonder what that must have been like, what they had to endure.”

Bishop Holley was in Ghana as part of a U.S. bishops’ delegation that recently met with church leaders in West Africa. The visit was led by Bishop John H. Ricard of Pensacola-Tallahassee, Fla., chairman of the U.S. bishops’ Subcommittee on the Church in Africa.

With the sadness he felt at Cape Coast, Bishop Holley said there was also reconciliation and peace.

He said he felt a sense of grace “to know that my family had made it across the Atlantic and to think now how many we are.”

The majority of the Cape Coast slaves were transported across the Atlantic to the Caribbean. More than 1 million were forced to work on British, Dutch, French and Spanish sugar plantations.

The castle guide said that for every 100 slaves who survived the imprisonment and the Atlantic crossing, another 50 to 100 perished in dungeons or at sea.