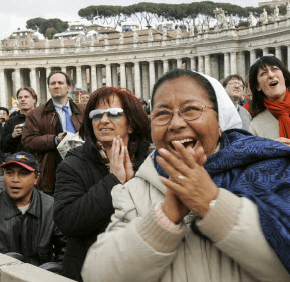 By Carol Glatz
Catholic News Service
VATICAN CITY – Though the Vatican has become increasingly savvy with more modern forms of communication, it’s still sticking with more primitive methods – swirling smoke and tolling bells – to announce whether a new pope has been elected.
In a similar vein, the Vatican press hall will not immediately issue an official bulletin, email alert, SMS or tweet to tell the 5,000 accredited journalists and other observers whether “Habemus papam.”
Jesuit Father Federico Lombardi, Vatican spokesman and head of the press office, said he would prefer people “live the moment” and try to figure out on their own what color the smoke is “rather than have a communique from the press hall.”
“Therefore, I won’t be spending time sending SMSs at that moment; I believe we should be living it,” he said to a round of applause from journalists during a news briefing March 9.
It was a surprising response from media whose 24/7 schedules and digital demands have long clashed with the Vatican, which still uses faxes, conducts almost all news conferences in Italian and most often closes shop between 2 p.m. and 6 p.m.
Perhaps those applauding the more romantic notion of “Carpe diem” were unaware that, with smoke colors high in the Roman sky, it’s always been “Hard to see ‘em.”
Telling whether the smoke is white (a successful election) or black (unsuccessful) has never been easy, even during the 2005 conclave, when the Vatican started using chemical packets to enhance the color of the smoke.
Even Father Lombardi said he was not sure what color the smoke was when gray puffs curled out of the Sistine Chapel chimney after a successful round of voting that chose now-retired Pope Benedict XVI.
In addition to the packets of chemicals, which are concocted by Vatican workers, the Vatican had also decided it would toll the bells of St. Peter’s Basilica with a successful vote in order to remove any doubt about the results. However, in 2005, the bells did not start ringing until about 10 minutes after the smoke had been wafting out.
Father Lombardi recalled phoning Vatican officials to see if the bells were going to be rung or not and said the uncertainty is actually part of “the beauty of these events.”
It was “very beautiful and (the confusion) lasted just a few minutes. I find it more interesting” this way rather than having everything run smoothly and predictably “like a Swiss watch,” he told journalists.
“Let’s see what happens this time. Obviously everyone will try to do their best,” he said, predicting that this time people should know fairly quickly whether a pope has been elected even though “a minimum amount of suspense” is needed.
Father Lombardi said Vatican television will be broadcasting the “fumate” (smoke) live with a camera positioned about 10 yards away from the chapel chimney, giving people a shot that’s “right in front of your nose.”
People unable to make it to St. Peter’s Square can tune in online at https://player.rv.va/.
Or they can get on social media like Twitter and follow the many handles offering “on-the-roof” coverage and alerts such as @PapalSmokeStack, @ConclaveChimney, @ConclaveStove and @PopeAlarm and PopeAlarm.com which are promising “When the smoke goes up, you’ll know what’s going down” via email or SMS.
At the end of the day, the old-fashioned way may be the most reliable. Emails can end up in a spam filter, servers can crash, cell phones run out of battery power, bandwidth at huge events gets saturated, making sending or receiving calls or messages impossible.
Whatever method people chose, the following is the expected “smoke schedule:”
– The first smoke signal is most likely expected about 7 p.m. (2 p.m. EDT) March 12 – if the cardinal electors decide to cast a vote the first day of the conclave.
– Beginning March 13, smoke would be expected at about noon and again about 7 p.m. (7 a.m. and 2 p.m. EDT).
– However, if a pope is elected on the first ballot of the morning, the white smoke would billow forth between 10:30 a.m. and 11 a.m. (5:30 a.m. and 6 a.m. EDT).
– If the pope is elected on the first ballot of the afternoon, the white smoke would be seen between 5:30 p.m. and 6 p.m. (12:30 p.m. and 1 p.m. EDT).
– After a white smoke signal, it takes about 40-45 minutes before the announcement of the name of the candidate who won. He must accept the office and change to white vestments, and the cardinals must pledge their obedience and pray again before he comes out on the balcony.
Related article:
Smoke and bells to signal new pope
Copyright (c) 2013 Catholic News Service/U.S. Conference of Catholic Bishops
PrevNext