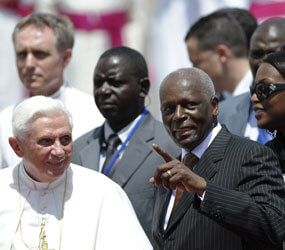 LUANDA, Angola – Arriving in Angola on the second stage of his African pilgrimage, Pope Benedict XVI encouraged the country to continue on the path of reconciliation after a devastating civil war.

As Angola recovers spiritually and economically from the conflict, it must not forget its own poor, the pope said after landing at Luanda’s airport March 20.

“The multitude of Angolans who live below the threshold of absolute poverty must not be forgotten. Do not disappoint their expectations!” the pope said.

Angolan President Jose Eduardo Dos Santos met the pontiff as he disembarked from the Alitalia charter plane that brought him from Cameroon. When a young woman who was presenting the pope with flowers lost her white cap, the pope promptly put it back on her head.

Then the president led the 81-year-old pontiff past a long line of dignitaries in torrid midday heat that brought handkerchiefs to many brows. The pope did not appear to be bothered by the warm temperatures, and he smiled as a crowd cheered and ululated from the airport rooftops.

Angola, a former Portuguese colony that became independent in 1975, was evangelized by missionaries more than 500 years ago. Today, about 57 percent of the population is Catholic, one of the highest percentages in Africa.

Angola’s civil war lasted 27 years, ending with a peace agreement in 2002. The fighting between government forces and a rebel movement supported by the United States left an estimated 500,000 dead, 80,000 maimed and the country’s infrastructure shattered.

In his arrival speech, the pope said that as someone who grew up in Germany during World War II he understood what war can do to a country and the need for moral and material rebuilding. He also referred to Germany’s postwar division, with oppression caused by “destructive ideologies.”

“You can therefore understand how keenly aware I am of dialogue as a way of overcoming every form of conflict and tension and making every nation – including your own – into a house of peace and fraternity,” he said.

Addressing all Angolans, the pope said the church would do its part in the country’s recovery, and that it shared in the common mission of “building together a freer and more peaceful society, marked by greater solidarity.”

The pope’s comments about not forgetting Angola’s impoverished sectors of the population touched on a sensitive topic in the southern African country. In recent years, Angola has emerged as an important supplier of crude oil, resulting in an economic boom that has created a growing rich-poor gap.

“Unfortunately, within the borders of Angola, there are still many poor people demanding that their rights be respected,” the pope said. He emphasized that the whole of Angola needs to be involved in the country’s healing and revitalization.

The pope added a particular appeal on behalf of flood victims in southern Angola, where torrential rains left some 20,000 people homeless a week before his arrival. He expressed his solidarity and his encouragement for their reconstruction efforts.

Dos Santos, who has been in power 30 years, told the pope that the entire country was looking forward to what he had to say during his visit.

He said his government’s goal was to build a “spiritually harmonious and tolerant nation, able to assume its responsibilities in defense of human dignity and honor, justice, solidarity, freedom and universal peace.”

The church should have a key role in this process, he said.

When the pope left the airport, his motorcade was engulfed in a sea of chanting, waving people, many of whom ran alongside the popemobile for blocks. The crowd extended all the way into the city center.

Later in the day the pope was scheduled to pay a formal visit to Dos Santos at the presidential palace, address foreign diplomats and meet with the country’s bishops.