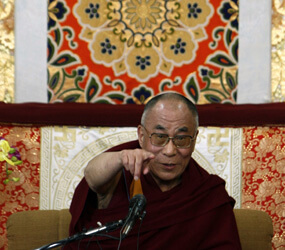 DURBAN, South Africa – Durban Cardinal Wilfrid Napier expressed “shock and regret” that the Dalai Lama, Tibet’s exiled spiritual leader and head of its self-proclaimed government-in-exile, was denied a visa to attend a meeting in South Africa.

“I am concerned that this man of peace is not allowed into our country at this time when we need people of peace to inspire us,” Cardinal Napier said in a statement. “I’m very concerned that our rights to association, freedom of religion and freedom of expression have been sold out to economic and political expedience once again.”

The Dalai Lama, winner of the 1989 Nobel Peace Prize, was scheduled to attend a peace conference sponsored by the 2010 FIFA World Cup in Johannesburg March 27. However, Irvin Khoza, chairman of the World Cup organizing committee, announced March 24 that the conference had been postponed indefinitely “to ensure it is held under conducive conditions.”

The conference schedule had included other Nobel peace laureates who were to discuss topics such as using soccer to fight racism and xenophobia.

The South African government said it refused the Dalai Lama a visa because it wanted the meeting to stay focused on South Africa, which is hosting next year’s soccer World Cup, and not on Tibet.

Retired Anglican Archbishop Desmond Tutu, winner of the 1984 Nobel Peace Prize, criticized his government’s decision and said March 23 that he would not attend the conference. He called the decision “disgraceful, in line with our country’s abysmal record at the United Nations Security Council.”

“We are shamelessly succumbing to Chinese pressure. I feel deeply distressed and ashamed,” he was quoted as saying.

China, a major trade partner for South Africa, claims sovereignty over Tibet. Many Tibetans, including those loyal to the Dalai Lama, want a return to autonomy for the region.

Former South African President F.W. de Klerk also had said he would not participate in the conference but expressed hope that the government would rescind its decision.