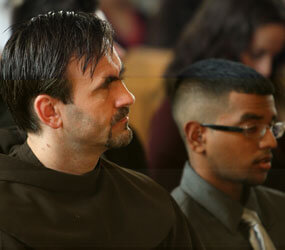 WASHINGTON – Participants at a Sept. 15 rally near the U.S. Capitol were invigorated in their fight for immigration reform by the previous day’s announcement of an upcoming Senate vote on a measure to help children of undocumented immigrants work toward legal status and get a college education.

About 500 people gathered at the Lutheran Church of the Reformation applauded and cheered as several speakers encouraged them to keep pressing forward on reform and not lose their momentum.

Many who spoke from the church podium described the Development, Relief and Education for Alien Minors Act, or the DREAM Act, as a crucial step in their fight.

The proposed measure would allow children of undocumented immigrants brought to the United States at an early age to become legal residents and qualify for in-state college tuition. It has long been a separate piece of legislation, first introduced in 2001, that has failed to advance in Congress.

Senate Majority Leader Harry Reid of Nevada announced Sept. 14 that he will offer the measure as an amendment to a major defense bill expected to receive a Senate vote the week of Sept. 20.

“This amendment will ensure that millions of children who grow up as Americans will be able to get the education they need to contribute to our economy,” Reid in a statement.

In a Sept. 15 blog posting, Los Angeles Cardinal Roger M. Mahony urged senators to vote in favor of the Dream Act, which he said has the support of the U.S. Catholic Church.

“The DREAM Act is not amnesty. Rather, it is the recognition that in our midst are many young people who only know one country: the United States. And they want to contribute to building up our country,” he wrote.

One of the rally speakers, Yves Gomes, a freshman at the University of Maryland, is very familiar with the challenges facing immigrant college students. Gomes was given a last-minute reprieve from his expected deportation this past August. The student, born in India, came to the United States when he was 14 months old. His mother and his father were deported in 2008 and 2009, respectively.

This year, five days before his own pending deportation, Gomes pleaded with fellow parishioners at St. Camillus Parish in Silver Spring, for petitions and prayers. Two days later, he received a phone call from immigration officials informing him of his two-year deferral.

“With the deportation now on hold, I can continue my life here in the U.S.,” he wrote in an Aug. 11 letter to President Barack Obama. He said he was grateful for the second chance, but he was saddened to realize that thousands in “similar and worse situations” did not have access to resources to help them.

“Mr. President, it is clearly wrong that there continue to be so many promising young adults who are prevented from achieving their full potential simply because they don’t have the right papers.”

The Obama administration has indicated it would support DREAM legislation even though the measure is not part of a comprehensive immigration reform package. Several Republican senators have voiced their opposition to the measure.

Gutierrez called the measure “a step in the right direction” and said he planned to ask Obama to freeze non-criminal deportations until immigration reform has passed.

Menendez, who was given a standing ovation by the crowd, also announced plans to introduce an immigration reform bill in the Senate.

Velazquez, chairwoman of the Congressional Hispanic Caucus, told the crowd that immigration reform was “at a crossroad” and “things are looking better.”

She praised the rally participants – who hailed from across the country and included a large number of students – for not giving up and urged them to keep up this pace. “We will not rest until we get comprehensive immigration reform, but we need your help,” she said.

And the participants did just that by spending the afternoon lobbying members of Congress on immigration reform.