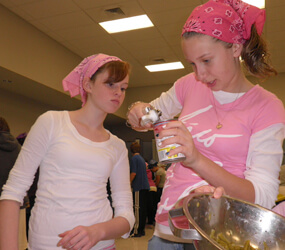 IJAMSVILLE – If cooking a turkey dinner is a way of putting faith into action, the youths of St. Ignatius of Loyola have voted to act with their feet and their paring knives.

Organizers of the second annual “Thanksgiving Cooking Up Faith” project at the Ijamsville parish could not accommodate all the young people who wanted to help; their kitchen/parish center was already bursting at the seams with more than 80 young people and adult helpers Nov. 25, the day before Thanksgiving.

They came to the Father Thomas T. Polk Social Hall to prepare 54 dinners for families in the area who needed a cooked meal for the holiday.

“With this economy there are people with no jobs,” said 12th-grader Joe Abretski, a peer minister and youth group member, who took charge of boiling steaming pots of potatoes in the parish kitchen. “It’s been a rough year for a lot of families.”

The number of families needing dinners more than doubled from last year, with the parish’s food pantry coordinator requesting an additional 34 dinners from the youth team organizing the event.

The project involves more than assembling the dinners. It began in September, when coordinator of religious education Carol Smith and her team canvassed the community for donations of food and funds.

“We speak not only with our words, but with our actions,” said Smith. “Sometimes the kids don’t even realize that they are contributing, until it’s done. And then they realize, that acts of God are just little things that we do every day – not insurmountable things.”

Sarah Fossaceca, an eighth-grader whose job was wrapping pies on the cooling table, said she likes combining service with a favorite activity – food preparation. “It’s fun, because not only are we helping people, but we get to work with food,” she said.

The youths rotated in groups to stations where they made sweet potatoes, carrots, stuffing, pies and green bean casseroles. Many were learning for the first time what a raw sweet potato looks like, or how to use a non-electric can opener.

“We came to help out the community and people in need,” said Alex Erdman, a 10th-grader who formed a team with David Abretski, Michael Schrider and James Jaworski. They also came away with new kitchen skills. Now, the boys said, grinning, they’ll be expected to help out more at home with their newfound talents.

Janelle Cyr, who was helping one of the teams, said that hands-on faith activities are what attracted her three youngsters.

“Kids like to do things,” she said, “and that makes this something they want to come back for. And Father (Michael J. Jendrek) says at the end of Mass each week, ‘Go in peace to love and serve the Lord,’ and now they know this is how they can do it.”

Father Jendrek spent the afternoon watching the kids as they chopped and mixed.

“Our fellow citizens of Frederick County,” he told the group, “are going to dine very well because of all your work.”