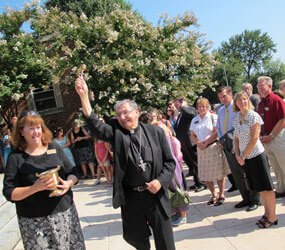 All the Catholic elementary schools of the Archdiocese of Baltimore were set to open on the same Aug. 29 date this year.

Hurricane Irene had other ideas.

Since Catholic schools follow the weather closings of the public school systems of their city or county, Catholic schools opened on different days after the Aug. 27 hurricane forced many counties to close schools.

Most Catholic schools were closed Aug. 29 and many remained shut a second day as The Catholic Review went to press Aug. 30.

“It’s a great disappointment,” said Dr. Barbara McGraw Edmondson, superintendent of Catholic schools. “It was to be the first time we had a collective opening of schools. We were hoping to create the same positive energy and momentum that was created among the teachers and administrators at our Convocation of Catholic Schools.”

The Convocation of Catholic Schools was a first-of-its-kind event held Aug. 22 for Catholic educators at the Baltimore Convention Center. It attracted more than 2,000 teachers and administrators.

The superintendent said the common school opening was meant to celebrate a sense of oneness in the school system.

The Seton Keough High School in Baltimore experienced flooding during the hurricane, but was expected to open on time, McGraw Edmondson said.

Earlier, the Archdiocese of Baltimore conducted structural inspections of all the schools in the archdiocese following the Aug. 22 earthquake. At least one school sustained damage in the quake: Our Lady of Mount Carmel School in Essex, which suffered cracks in a wall in its gymnasium.

St. Pius X School in Rodgers Forge hosted a ribbon-cutting ceremony for the opening of its new Montessori program Aug. 26.

It is the first school in the archdiocese to provide the program, which school leaders say allows children to learn at a more individualized pace by focusing on the human aspects of development – intellectual, social, emotional, physical and spiritual.

St. Pius X is partnering with Loyola University Maryland, which has one of the premiere Montessori graduate programs in the United States.

“The school is a dynamic educational environment,” said Maggie Dates, principal, “and this additional program will be very attractive to many families.”