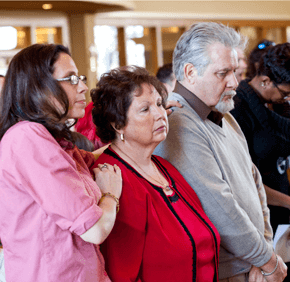 (Editor’s note: The numerical data in this story has been updated.)

Tonya Smith said she didn’t grow up religious or practicing a particular faith tradition, but after meeting her fiancé, a Catholic, and seeing their two children baptized, she decided that it was time to join the Catholic Church.

“I just figured it was time to finally be baptized,” said Smith, 36, who worships at Our Lady of Hope, Dundalk. “I seemed to be able to relate to the Catholic religion more than any other religion. The church has the same views I have. They practice what they preach.”

Smith was one of more than 400 candidates and catechumens from 52 parishes who filled the Cathedral of Mary Our Queen in Homeland Feb. 26 for the annual Rite of Election.

Not all catechumens and candidates entering the church attended one of the three Feb. 26 services.

Candidates have been baptized but have not received the sacraments of Communion and/or confirmation; catechumens have not been baptized.

During the Rite of Election, godparents gathered with catechumens and sponsors with their candidates. Catechumens signed the Book of the Elect at their home parishes during Masses Feb. 25 and 26.

Cardinal Edwin F. O’Brien presided at the cathedral. In his first public appearance in Baltimore since the Feb. 18 consistory in Rome, he told candidates and catechumens during his homily to see their journey “as a process in progress.”

“If only the enthusiasm that is ours today would be as radiant in the rest of us,” Cardinal O’Brien said. “You catechumens and candidates may be the spark to enkindle the Holy Spirit within the rest of us.”

Cardinal O’Brien urged candidates and catechumens to “become active, zealous participants in parish life” and to make God “the center of your life, not only on Sundays but also on the weekdays.”

Moe Greenberg said he decided to join the church after being married nearly 13 years ago at Sacred Heart, Glyndon, and raising two daughters in the Catholic Church.

“I think it’s been a gradual thing leading me here,” said Greenberg, 43, of Finksburg.

Greenberg said he “started to take note of particular role models in faith,” including his father-in-law, a colleague and his wife, Kathleen Greenberg.

Catechumen Nancy Portillo, 17, a parishioner of Sacred Heart, Glyndon, said she is a lifelong Catholic but hasn’t been through the sacraments.

“I decided now that I’m older I understand more of the religious things,” she said.

RCIA invites and forms new members while inspiring a renewed enthusiasm of faith among those who have received the sacraments.