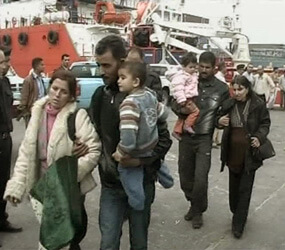 ROME – The drowning death of hundreds of people trying to immigrate to Europe through Libya in late March is a sign of the desperation of the poor and persecuted, and of the failure of government efforts to stop illegal immigration, several Catholic agencies said.

“These people have no alternative but to entrust themselves to human smugglers who often treat them as meat,” said Berardino Guarino, project director for Fondazione Migrantes, an Italian Catholic organization that assists migrants.

At least 200, and perhaps as many as 300, immigrants were listed as missing and presumed dead after three boats sank off the coast of Libya in rough waters March 27-29. An Italian merchant ship rescued another 300 people and recovered 21 dead bodies from the water the night of March 28-29 after the fishing boat they were packed onto sent out a distress call.

Authorities said those trying to cross the Mediterranean to Italy from Libya included people from Bangladesh, Egypt and other parts of Africa. Refugees and the desperate poor from Asia and Africa cross the Libyan desert to the coast where they pay smugglers for a place on crowded, rickety fishing boats headed for Europe.

Mr. Guarino told Vatican Radio March 31 that poverty and oppression mean the influx of migrants to Europe “will not end easily, which means we must find ways to create humanitarian channels so that these people can arrive in Italy without these dangerous voyages.”

“We must remember that on these boats there are refugees, people who have a right to asylum,” he said. “The question will not be resolved simply by patrolling the coasts.”

Oliviero Forti, director of the immigration office of Caritas Italy, told Vatican Radio, “Unfortunately this was a disaster waiting to happen. The fact that governments are enacting increasingly restrictive measures just means that the routes are changing.”

Focusing only on blocking immigration has not worked and will not work, he said.

“Evidently the conditions causing people to leave are so serious that even this risk (of drowning) is recognized and put into the calculation,” Forti said. “Thousands of people cross the sea each year and several hundred – maybe as many as 1,000 – meet their deaths.”

The Rome-based Community of Sant’Egidio, expressing its condolences to those who lost loved ones at sea, asked the Italian government and the international community for “policies of solidarity, acceptance and respect for asylum-seekers and migrants.”

“People call them ‘illegals’ in a simplistic way and usually do not know the pain and suffering they have experienced, and they deny them their dignity, respect and a welcome,” said a March 31 statement from the community.

“Many enter irregularly because they are fleeing war, persecution, corruption, hunger, thirst or catastrophes and it is impossible for them to get a regular entrance visa,” the statement said.

The Sant’Egidio members called for “a farsighted policy of development cooperation, particularly for Africa, to concretely help young people remain in their countries in order to contribute to their development.”