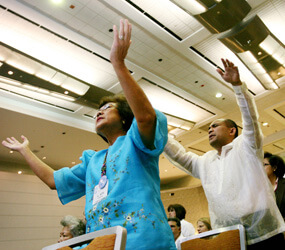 Raising their hands high above their heads and gently swaying to the beat of a Christian rock band from California, hundreds of Filipino Catholics seemed lost in prayer at the Baltimore Convention Center June 26. They were calling down the power of the Holy Spirit and hoping to receive inspiration to renew their faith.

“We want everyone to know how awesome God is,” said Agnes Nepomuceno, a parishioner of St. John the Evangelist in Severna Park and one of the organizers of the 15th national convention of the Alliance of Filipino Catholic Charismatic Prayer Communities, held June 26-28 at the convention center.

“He is the source of all that we do,” she said. “If we just yield to the Holy Spirit, we can change the face of the earth.”

More than 800 people from across the country attended the gathering, which featured several Filipino bishops as speakers. The convention’s theme was taken from Isaiah 61:1, “The Spirit of the Lord is upon me,” and Baltimore Auxiliary Bishop Denis J. Madden celebrated a special Mass.

A major goal of the gathering, Nepomuceno said, was to inspire Catholics to deepen their faith and return to their parishes and move others to take their faith more seriously. During the convention, volunteers often rang handbells to call people to prayer and worship.

The charismatic movement is very strong in the Filipino community, and there are approximately 2,500 charismatic Filipino prayer groups that meet weekly throughout North America, according to Robert Canton, California-based national coordinator for the Alliance of Filipino Catholic Charismatic Prayer Communities.

More than 20 charismatic Filipino prayer groups meet in Maryland, Canton said, and many attract Catholics of all ethnic groups.

“We’re increasing in number throughout the world,” Canton said. “People want to experience the power of the Holy Spirit and the grace of Pentecost and conversion.”

Active in healing ministry, Canton often paused to pray with convention goers. Resting his hands on those looking for healing, he asked God to bring joy and peace into their lives. At least one woman said her back pain disappeared after praying with Canton , and others found spiritual healing.

“It’s a common thing among our prayer communities to pray with each other,” Canton said. “There’s a real thirst for spiritual healing – to become like Jesus.”

Canton noted that many religious vocations have sprung from Filipino prayer communities, especially in the Philippines.

Josephine Uy, a New York native, said Filipinos are drawn to the charismatic movement because of its emphasis on community.

“Filipinos are basically very friendly and love people and work better in groups,” she said. “When we pray, we want to pray together and support one another when we have problems. The prayer communities are like the glue that holds people together.”