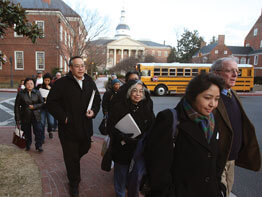 Amanda Ceraldi could have spent her Presidents Day holiday taking in a movie or hanging out with her friends. Instead, the 16-year-old parishioner of Our Lady of the Chesapeake in Lake Shore traveled to Annapolis to convince her lawmakers to ban the death penalty in Maryland.

“My church teaches me that all life is sacred,” Amanda said. “I think it’s important for my lawmakers to hear that message.”

Amanda was one of 600 Catholics from throughout the state who converged on Annapolis for the 25th annual Lobby Night sponsored by the Maryland Catholic Conference, the legislative lobbying arm of the state’s Catholic bishops.

Participants listened to briefings on the issues at St. Mary’s High School before shuttling to legislative offices to meet with their senators and delegates.

Sitting in a House of Delegates conference room with 10 other constituents from her Anne Arundel County district, Amanda spoke passionately with her lawmakers about the right to life – even for those who have committed heinous acts.

“I believe that an eye for an eye makes two people blind,” the junior at Chesapeake High School in Pasadena told her representatives.

Other parishioners told lawmakers that the death penalty is costly and unequally applied in Maryland on the basis of race and geography. They emphasized that there is a chance of an innocent person being killed.

In a give-and-take conversation, their legislators seemed reluctant to repeal capital punishment.

Sen. Bryan W. Simonaire, an Anne Arundel County Republican, told his constituents he is examining the findings of the Maryland Commission on Capital Punishment as he studies the issue. The senator serves on the Senate Judicial Proceedings Committee that is considering a bill to ban the death penalty and replace it with sentences of life without parole. He holds a key swing vote on whether the measure will make it to the Senate floor.

“I’m struggling with the question of whether there are enough flaws in the system to warrant repeal or whether it can be improved,” Sen. Simonaire told the lobbyists.

Del. Donald A. Dwyer Jr., also an Anne Arundel County Republican, was adamant in his support for the death penalty – insisting that it is “biblical.”

Del. Nicholaus Kipke, an Anne Arundel County Republican, emphasized that he must represent the beliefs of the district he represents. It’s critical that he hear the people on the issue, he said.

“I’ve gotten more calls on the puppy mill bill than I have on the death penalty,” he said. “I really want to hear what people think.”

Nancy Thomas, a parishioner of St. Joseph’s Passionist Monastery Church in Irvington, said she was pleased with the response she received from her Baltimore City lawmakers at Lobby Night. She attended the event to be a voice for the poor and vulnerable in the state – people she believes are often underrepresented.

“I work with low-income families and immigrants,” said Ms. Thomas, a Head Start director. “Those issues are close to my heart.”

“The issues change from year to year, but what doesn’t change is our commitment to every human life,” Archbishop O’Brien said. “Our positions are not always popular, but they are powered by faith.”