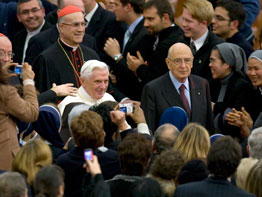 VATICAN CITY – The foundation upon which the Universal Declaration of Human Rights is based will remain fragile if its ethical and divine origins are ignored, Pope Benedict XVI said during a Vatican commemoration of the document’s 60th anniversary.

While much has been done over the past decades to promote and safeguard human rights around the world, “hundreds of millions of our brothers and sisters still see their rights to life, liberty, and security threatened,” he said.

The pope made his comments Dec. 10 during a Vatican celebration of the 60th anniversary of the adoption of the universal declaration by the United Nations General Assembly.

The event, sponsored by the Pontifical Council for Justice and Peace, included a concert by the Frankfurt Brandenburg State Orchestra, which was conducted by the Spanish composer, Inma Shara.

Featuring works by Felix Mendelssohn and Wolfgang Amadeus Mozart, the musical event marked the first time a woman conducted a concert at the Vatican.

In an address after the concert, the pope said fundamental human rights are based on natural law, which is inscribed by God in every human conscience. Because natural law is “a common denominator” in all cultures and peoples, it is “a universal guide that everyone can recognize” and understand, he said.

Human rights ultimately come from God, the creator, who gave everyone reason and freedom, he said.

“If this solid ethical base is disregarded, human rights remain fragile because they are deprived of a solid foundation,” he said.

The pope said the 60th anniversary of the U.N. human rights declaration offers an opportunity to assess how well the world’s nations and individuals are respecting the ideals contained in the document.

Unfortunately human equality and dignity are not always respected, “while new barriers have been raised for reasons tied to race, religion, political opinion or other convictions,” he said.

Speaking before the concert, Cardinal Tarcisio Bertone, Vatican secretary of state, said of all the fundamental human rights outlined in the 30 articles of the U.N. declaration, not one is more or less important than the other.

“There is no hierarchy” in the field of basic rights, he said, since each right reflects and is linked to the others.

The church’s insistence on the importance of the right to life and right to religious freedom “does not stem, therefore, from a desire to want to create a hierarchy” or different classes of human rights, he said.

The church’s emphasis on these two rights rather comes from the need to remind people that human rights are not founded “on their own, but are expressions of the identity and dignity of the human person,” he said.

Receiving the gift of life and being able to praise and worship the creator of life are rights that underpin all other basic rights and do not make subsequent rights inferior, he explained.

When the right to life and religious freedom are violated, “respect for the other rights wavers” and loses its footing, Cardinal Bertone said.

He said people cannot pick and choose which fundamental human rights should be supported or ignored.