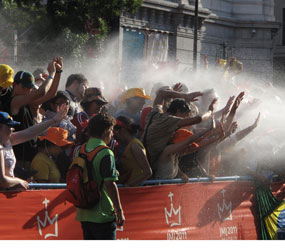 MADRID – The 26 pilgrims of the Archdiocese of Baltimore, plus young people from Mount de Sales Academy in Catonsville and St. Mary’s High School in Annapolis, had memorable experiences during their week-long stay at World Youth Day.

They celebrated Mass with their fellow U.S. countrymen; heard catechesis lessons from New York Archbishop Timothy Dolan, the president of the U.S. Conference of Catholic Bishops; made trades with people from across the globe; walked in the footsteps of saints like Teresa of Avila; met clergy and religious; and participated in a Mass celebrated by Pope Benedict XVI.

During his Angelus, the pope said, “You are now about to go back home. Your friends will want to know how you have changed after being in this lovely city with the pope and with hundreds of thousands of other young people from around the world. What are you going to tell them?

“I invite you to give a bold witness of Christian living to them. In this way you will give birth to new Christians and will help the church grow strongly in the hearts of many others.”

Speaking to young people, Archbishop O’Brien said he hoped they would become more conscious of those around them and accept new people to their country.

“When I go home I appreciate my country,” he said, “and I also appreciate those who are not in my country who are struggling, as you have struggled these few days for language and how frustrating it is for acceptance. I think that’s an important thing for Americans.

“We’re so self-satisfied. The whole world centers around the ‘good, old U.S.A.’ It’s our country and we love it. Travel opens our eyes to others.”

As they return to the U.S., what will pilgrims do next?

Erin Cain, a parishioner of Cathedral of Mary Our Queen in Homeland and student at Notre Dame Preparatory School in Towson, said she would be more conscious of Jesus’ sacrifice.

“I’m going to try and not complain as much and keep thanking God for what he did,” Cain said.

Mount de Sales student Grace Woo said she will be an evangelizer.

Veronica Zoeckler, a fellow Mount de Sales student, said she has learned to live in the present.

“I feel like I’ve been given enough grace to be open to all kinds of things that have been given to me,” she said.

For more of the pilgrims thoughts on World Youth Day, visit CatholicReview.org/palmerblog.