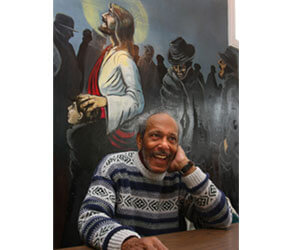 WASHINGTON – Whenever Robert Carlisle leaves his modest apartment on Cleveland’s near west side, he turns off the heat so he can save a little money on his gas bill for a pair of shoes or a bus pass. He does the same at night when he climbs into bed under an extra blanket.

Turning down the heat is an easy step to take, Carlisle said after breakfast Dec. 30 at the West Side Catholic Center, a few blocks from his home. It’s especially important, he said, when he’s “budgeting down to every penny.”

What little money Carlisle earns from odd jobs is used for necessities, mainly rent and utilities, leaving little for food. So he visits the West Side Catholic Center for meals and even to shower. The money he saves on heating water and on a light breakfast or lunch can mean the difference between having a roof over his head or living in the streets.

“I come here because it does help offset my income,” said Carlisle, 42.

People like Carlisle – those with limited or reduced incomes – turned to places such as the West Side Catholic Center in increasing numbers in 2008, according to the U.S. Department of Agriculture. They are experiencing what the department calls food insecurity.

Barbara Taylor, center supervisor, told Catholic News Service just before the new year that people are seeking assistance not just for a meal, but for clothing as well. She has seen more working people trying stretch their dollars for rent or mortgage payments. One man who shows up almost every day for lunch is a part-time Regional Transit Authority bus driver, who, for now, is living in his van, she said.

“He said with his divorce and child support and his part-time work, it’s the only way he can make ends meet,” Taylor said. “His only request for me was to have a place to iron his uniform a few times a month so he can keep his job and work toward full-time employment.”

In a recent report the USDA said 16.7 million households – 14.6 percent of all households – were food-insecure in 2008 as the recession escalated. That means at some point during the year those households lacked the resources to provide enough food for their members. To cope, they turned to emergency kitchens and food pantries.

About one-third of the households were considered to have very low food security, meaning some people ate less or changed their eating patterns.

The overall number of households facing food shortages jumped 11 percent in 2008 to the highest level recorded since such statistics were first compiled in 1995. In 2007, 13 million households were short of food.

The highest need for food was in rural areas and large cities, while suburban households fared better, the USDA reported.

Pantries and food programs across the country have seen significant increases in people showing up for help. At Catholic Charities of Southern Nevada in Las Vegas, the number of people seeking emergency food assistance has doubled to nearly 100 families a day, five days a week.

“People come to keep the house,” said Sharon Mann, community relations director at the agency. “Our clientele has changed. It used to be people who would come on foot or by bus, truly the working poor, those just getting by or not working. We’ve completely changed now. Because Las Vegas was so hardly hit by foreclosures and people who’ve lost their jobs, we’re seeing husbands and wives coming. Some of our donors have become clients.

“It’s helping them keep under a roof,” she continued. “We are now seeing people who have never, never had to ask us for help.”

Across the country at Catholic Charities of Brooklyn and Queens in New York, Nina Valmonte said her program topped the 1 million meal mark for the first time during the fiscal year ending in June. A normal year finds the program serving 600,000 to 700,000 meals.

“It becomes a choice between paying the mortgage or paying the rent or getting food,” she said.

Seeing a growing need, Valmonte’s program initiated a grant program in 2008 to help parishes improve their emergency outreach. “Guess what? Most of them said they would use the money to start or expand a food pantry,” she said.

Similar increases in food requests have been reported in places such as Dayton, Ohio; Austin, Texas; and Lake Charles, La., according to the most recent Catholic Charities USA quarterly survey of its agencies. Overall, the survey found 76 percent of Catholic Charities agencies reporting an increased demand for food.

Efforts are under way to reduce hunger in the U.S. Among the most ambitious is the No Childhood Hunger in America by 2015 campaign by the National Anti-Hunger Organizations. Among its supporters is the Alliance to End Hunger, to which the U.S. Conference of Catholic Bishops belongs.

Citing President Barack Obama’s campaign pledge to reduce childhood hunger by the middle of the next decade, the effort has outlined what it describes as a roadmap to end childhood hunger, a major step to reducing hunger overall in the U.S.

The plan offers nine steps that cover a wide array of economic and tax policies, health care, education, family supports, nutrition programs and leadership from the White House to achieve the goal in five years.

The hope among major anti-hunger organizations is that by ending childhood hunger the momentum will build to eliminate all hunger in the U.S. soon thereafter.

More information about the No Childhood Hunger in America by 2015 campaign can be found online at www.alliancetoendhunger.org/documents/NAHORoadmaptoEndChildhoodHungerlo-res.pdf