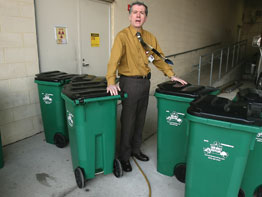 Like others, hospitals are trying to lessen the impact they have on the environment.

Rachel DeMunda, director of environmental health and safety for Mercy Medical Center in Baltimore, said Mercy used to incinerate most of its waste since the hospital had its own incinerator.

But the incinerator was torn down to make way for the new patient tower, and Mercy adopted a waste-minimizing program that reduced “red-bag” waste, which is regulated medical waste, by 60 percent.

Employees also recycle cardboard and electronic waste, such as printer cartridges and batteries.

Kimmi Campagna, senior general manager for CURA Hospitality, which provides Mercy’s food service, said the kitchen staff separates organic material, such as carrot tops and potato skins, into special bins. The bins are collected by a company that composts it, turning Mercy’s scraps into “good dirt.”

Another initiative, Ms. Campagna added, is corn-based drinking cups, which biodegrade in 50 days, unlike petroleum-based cups, which can linger in a landfill for decades.

Buying napkins made from recycled paper makes a big difference, too.

“When you’re using several thousand a day – when you have an institution the size of ours – a little change has a huge impact,” Ms. Campagna said.

Ms. DeMunda said last year the hospital recycled more than a half million pounds, or about 14 percent of its waste.

“That’s not really great,” she said, noting that some hospitals recycle as much as 40 percent to 50 percent. But Mercy’s recycling efforts are just a year old, and the program is growing.

Another change has been to use greener cleaning products with fewer chemicals.

“A lot of new cleaning chemicals are hydrogen peroxide-based instead of caustic or corrosive agents,” Ms. DeMunda said. “It does impact patient safety and employee safety.”

All of these efforts have evolved into a program known as “Have Mercy on the Earth.”

Next year’s goals include getting rid of all mercury used in the hospital.

Good Samaritan Hospital kicked off its environmental program, “Green … for Good,” this summer.

The most visible change was the installation of gigantic, state-of-the-art laundry equipment, including a tunnel washer and automatic dryers, ironers and folders.

The equipment decreased the use of steam, water and electricity by more than 30 percent. Those savings are critical in an institution that handles up to 11,000 pounds of laundry every day, said Florin Kuhn, director of environmental services and laundry.

The dryers also have a self-contained lint collection.

“In the past that would have gone outside,” said Mr. Kuhn. “That’s a big, green kind of improvement.”

The hospital has an interdisciplinary “green team” that meets regularly. It has initiated a recycling program targeting paper, plastic and glass. Confidential paperwork is shredded at the hospital and then recycled. Biomedical and computer equipment – some 8,000 pounds a month – is recycled as well. Employees can bring in electronics from home for the monthly collection.

Organic food scraps from the kitchen are collected in special containers for a thrice-weekly pickup and taken to a farm in Anne Arundel County for composting.

While certain items, needles for example, must be incinerated for safety, the hospital has initiated a program of outsourcing and recycling “sharps” containers for other sharp objects.

Such initiatives not only help the environment, they’re equally beneficial for the bottom line.

Ms. DeMunda said red-bag waste costs 22 cents a pound to dispose of, compared to about four cents for regular trash. Mr. Kuhn notes it costs about 30 cents per pound of laundry with the new equipment while hospitals that outsource their laundry pay close to a dollar a pound.

Mr. Kuhn said he’s focusing on “anything that has a recycling possibility. This is the beginning of the program, but I can see it evolving.”

“We have a green plan for the next five years to reduce the waste stream,” Mr. Kuhn said.