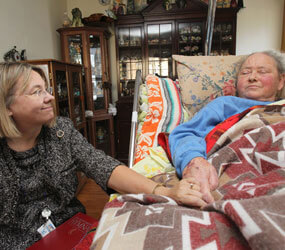 ROCKVILLE – The sounds of joyful singing fill the first floor of the suburban Washington home of Irma and Celia Nissen.

The downstairs is now dominated by Celia Nissen’s hospital bed, which she has rarely left during the past two years. And the singing is part of what most might expect would be a sorrowful occasion – the monthly visit by Catholic hospice chaplain Susan Mitchell, whose job is to provide pastoral care and spiritual direction for the dying and their families.

The Argentine-born Nissen sisters, who also spent many years in Denmark, clearly enjoy Mitchell’s company as she inquires about what has happened in their lives since she last saw them, asks about their Christmas plans and joins them in singing Christmas carols and their favorite hymn, “How Great Thou Art.”

“I’m happy; I don’t have any problems,” says 70-year-old Celia Nissen, shaking the hands of visitors with a surprising strong grip. “If I’m sick, I’m sick,” she adds with a slight shrug.

Not many in her situation would be so accepting. Diagnosed with what Irma Nissen called a “tumor of the cerebellum” in 1998, Celia Nissen has been in hospice care since August 2008 – far longer than any of Mitchell’s other patients. In general, patients only enter hospice care if a physician certifies that, given the normal course of events, it would not be surprising if the patient were to die within six months.

Mitchell has an average caseload of 30-35 people, although she might see one patient only every six weeks or so and another four or five days a week, especially near the end of life.

The hospice program Mitchell works for is associated with Holy Cross Hospital in Silver Spring. But only about half of the patients she sees at any given time are Catholic.

“You don’t have to be Catholic to have a chaplain; we have all different religious affiliations” and some patients with no religion at all, she said.

For families who do not have their own priest or minister, Mitchell also sometimes leads memorial services at funeral parlors and/or graveside services for those she has come to know through hospice.

“You have to have professionalism and detachment, but there are always those patients that really touch you,” Mitchell said, recalling one patient who felt she was “going in and out of the presence of God” during her final days. “She reached a place of absolute peace and radiance,” the chaplain said. “She left a mark on me.”

Mitchell said her own experience with the death of her father in 2000 was “transformative, a call experience” that led her to give up her work in parish religious education and pursue a theology degree and work as a chaplain.

“Hospice is where I am supposed to be,” she said. “To be near the end of life is like walking on holy ground. It’s an area that too often we don’t spend enough time reflecting on.”

About 40-45 percent of Mitchell’s patients have some form of dementia, but nearly everyone responds well to prayer, song and – if they are Catholic and can recognize what the sacrament signifies – the Eucharist.

“Even if they don’t know how many grandchildren they have, they could be able to sing ‘Adeste Fideles’ in Latin, from back when they were singing in the choir,” Mitchell said.

While most patients experience hospice in their homes, Mitchell also visits some at nursing homes and assisted living centers. Holy Cross also has a small in-hospital hospice for those who cannot return home.

In addition to what they can provide to the patient, hospice chaplains are a resource and support to the families of the dying.

“I don’t know if I would have survived without” the assistance of the hospice program, said Irma Nissen, 67, the sole caregiver for her older sister.

In addition to the spiritual care provided by Mitchell, hospice includes the assistance of nurses, medical social workers, home health aides, specialized therapists such as the massage therapist who visits Celia Nissen periodically and hospice volunteers.

Although she admits to being “a nervous wreck” for the first couple of days after the decision was made to begin hospice, because of all of the new people coming in and out of her house, Irma Nissen said those people “aren’t strangers anymore.”

“We need people to come and talk with us,” she said. “It’s like we are in a little bubble here.”

Last Christmas, the Nissens made red-and-white Danish heart ornaments for each of the people who had helped them through the Holy Cross hospice program.

Calling the ornaments “something you make with love,” Irma Nissen said the hospice professionals and volunteers “don’t come to us with money; they come with their love and their time.”