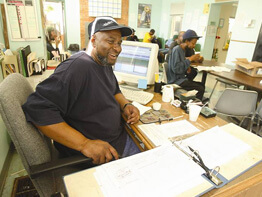 As William Bryant made his way to the Homeland campus of Loyola College in Maryland June 5, he had more to be proud of than the honor St. Vincent de Paul of Baltimore was about to bestow on him.

The formerly drug-addicted homeless man moved into his own apartment earlier in the day, marking the first time the 52-year-old Frederick Ozanam House graduate has had a residence he could call his own in 25 years.

After receiving his New Life Award from the organization that oversaw his rehabilitation program at the Frederick Ozanam House in Fells Point, Mr. Bryant knew he would have to arrive at his new West Baltimore apartment early, in order to get enough rest to make it to his new job as the front-desk receptionist at the Beans & Bread homeless resource center.

“It has been a very good year for me,” the smiling award recipient said. “It’s a whole new life now.”

Mr. Bryant was one of 69 clients, staff members and volunteers honored by St. Vincent de Paul during its Celebration 2007 dinner and awards ceremony, themed “Be The Change.”

John J. Schiavone, executive director of St. Vincent de Paul, said all of the honorees exemplify community improvement through their hard work, generosity and service.
When Mr. Bryant received his award, he represented clients as a recent graduate of the Frederick Ozanam House, volunteers as a former unpaid helper at Beans & Bread, and staff members as a recently hired employee of Beans & Bread.

The divorced father of three and grandfather of nine will celebrate three years of sobriety in July and owes a 2004 heart attack for the positive change in his life.

Following his third stint in prison – on a three-year sentence for a possession and drug distribution conviction – Mr. Bryant returned to Baltimore in 2002, where he mostly lived on the streets and continued his dissent into drug addiction.

In July of 2004 he collapsed on the street and was taken to The Johns Hopkins Hospital, Baltimore, where doctors performed triple-bypass heart surgery. He was then transferred to First Step Rehabilitation Center.

“One of the counselors at First Step knew about (the Frederick Ozanam House) and she helped me get in,” Mr. Bryant said. “I didn’t know it at the time, but it was a life-changing event.”

During his time living at the transitional house, he threw himself into a substance abuse treatment program, participated in employment readiness classes and volunteered at Beans & Bread next door.

“I got a dose of reality during that time and learned the truth about myself,” Mr. Bryant said. “I learned not to run away from my problems, how to love and respect myself and others and how to treat people.”

Calling this time a humbling experience, he was thrilled when Beans & Bread hired him at the end of May.

“Will has always been an easy-approachable guy,” said Kathleen Spain, director of Beans & Bread. “His warm personality is suitable for customer service. He is very open to feedback and on-going training. He learned how to input key information into our software system and is regularly using his own e-mail account.”

As a self-proclaimed work in progress, Mr. Bryant is looking forward to a productive life and hopes he can help others at Beans & Bread improve their circumstances as well.