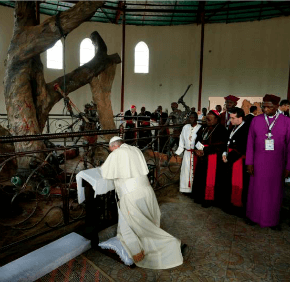 KAMPALA, Uganda – As Pope Francis encouraged Ugandan Christians to draw inspiration from the 19th-century Ugandan Martyrs, he carried with him graphic images of the horrors the 45 Anglican and Catholic martyrs endured.

The pope made an early morning visit Nov. 28 to the Anglican shrine and museum located on the site where many of the martyrs died. The main exhibit features realistic statues of men being tortured, bound and thrown on a fire.

Pope Francis had a look of shock on his face as Anglican Archbishop Stanley Ntagali of Uganda explained how the martyrs were executed on the orders of King Mwanga II in the late 1800s.

Afterward, the pope celebrated a Mass outside the nearby Catholic shrine to the martyrs. The shrine has an artificial lake, and Ugandan security patrolled it in a little rubber boat throughout the liturgy.

In his homily, Pope Francis honored all the martyrs, noting that they shared the same faith in Jesus and they offer a witness to “the ecumenism of blood.”

Honoring the martyrs is not something to be done only on their feast day, he said, but must be done daily through upright behavior and loving care for others in the family, the neighborhood, at work and in society.

Keeping one’s eyes focused on God, he said, “does not diminish our concern for this world, as if we only look to the life to come. Instead, it gives purpose to our lives in this world and helps us to reach out to those in need, to cooperate with others for the common good and to build a more just society which promotes human dignity, defends God’s gift of life and protects the wonders of nature, his creation and our common home.”

Heart-breaking modern challenges to faith led Pope Francis to abandon the text he had prepared for an afternoon meeting with Ugandan youths. Instead, he tried to respond directly to the young woman and young man who addressed him, although the effort was plagued by technical problems with the microphone.

Winnie Nansumba, 24, told the pope she was born HIV-positive and, “as a young woman, I always found it hard to fall in love because I thought I didn’t have a right to love and be loved.”

In the end, she said, she decided to use her story to teach other youths about HIV and AIDS, particularly that “we must respect our life and that of others,” changing behavior to prevent the spread of the disease.

“Take charge of your life and know your (HIV) status,” she told the estimated 150,000 youths gathered at the Kololo airstrip to see the pope. “AIDS is real, but it can be prevented and managed.”

Pope Francis did not speak specifically about AIDS or its prevention, but spoke instead about overcoming despair and depression and fighting for one’s life.

He also went on at length about courage, referring both to Nansumba and to Emmanuel Odokonyero, who had talked about being kidnapped by the rebel Lord’s Resistance Army in 2003, tortured and escaping after three months.

From the late 1980s and for more than 20 years, the Lord’s Resistance Army terrorized Uganda, kidnapping thousands of children and forcing hundreds of thousands of people to seek safety in camps for displaced persons.

“In your veins the blood of martyrs flows,” the pope told the two youths. “That is why your faith is so strong.”

The pope urged the young people to find positive challenges in the negative events of their lives, to trust Jesus to transform their suffering into joy and to turn to Mary when experiencing pain, just like a child runs to his or her mother after falling and getting hurt.

In the early evening the pope visited the House of Charity in Kampala’s Nalukolongo neighborhood; the Good Shepherd Sisters run a home there for 102 elderly and people with severe disabilities. The residents range in age from 11 years to 107 years, said Bishop Robert Muhiirwa of Fort Portal, chair of the Ugandan bishops’ health commission.

“Our families need to become ever more evident signs of God’s patient and merciful love, not only for our children and elders, but for all those in need,” the pope said. “Our parishes must not close their doors or their ears to the cry of the poor. This is the royal road of Christian discipleship.”

Meeting with Uganda’s priests, religious and seminarians 11 hours after his day had begun, Pope Francis spoke about the importance of remembering the martyrs by witnessing to the faith like they did, by remaining faithful to their vocations and by praying.

The pope publicly thanked the Good Shepherd Sisters for the “example of fidelity” they showed him at the House of Charity, “fidelity to the poor, the infirm and the disabled because Christ is there.”

Ugandan soil, “bathed by the blood of martyrs,” always will need new witnesses to faith, he told the priests and religious.

Choice is clear, pope says: Protect the environment or destroy it