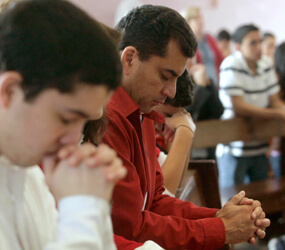 MEXICO CITY — The president of the Honduran bishops’ communications department expressed early satisfaction with Nov. 29 elections that he said would allow the Central American country to emerge from a five-month political crisis provoked by the ouster and exile of President Manuel Zelaya.

“The only exit that we had from the political crisis was the elections,” Auxiliary Bishop Romulo Emiliani Sanchez of San Pedro Sula told Catholic News Service in a telephone interview.

The bishops’ conference had called on Hondurans to support the electoral process, “but did not oblige them to do so,” Bishop Emiliani said, adding that election day was peaceful in most of the country.

Early tallies from the Supreme Electoral Tribunal overwhelmingly favored National Party candidate Porfirio Lobo, who narrowly lost the 2005 election to Zelaya. The rancher and father of 13 took more than 50 percent of the popular vote, and his closest opponent, Elvin Santos, conceded, after receiving around 37 percent of the vote.

Bishop Emiliani said the entire bishops’ conference would issue a statement once the electoral tribunal certified the results.

In Washington, Assistant Secretary of State for Western Hemisphere Affairs Arturo Valenzuela said the U.S. government “recognized the results” and that Lobo would be Honduras’ next president. He also said the United States believed the election met international standards of fairness and transparency.

Caritas Honduras, the church’s charitable aid agency, joined the Honduras Evangelical Fellowship and other civil society groups to recruit more than 1,100 volunteers to work as electoral observers, said Pedro Landa, director of the Caritas office in the Archdiocese of Tegucigalpa.

The observers “found enthusiasm for voting,” he said, but also “an atmosphere of uncertainty” surrounding the election. According to Honduran media reports, voting was carried out under a visible military and police presence.

Some Catholics in western Honduras disagreed with Landa’s observations. John Donaghy, a lay missionary from Ames, Iowa, told CNS there “wasn’t much enthusiasm (for the elections) among priests” in the Diocese of Santa Rosa de Copan, where church leaders voiced strong opposition to the coup. Donaghy said that during the campaign several priests in his diocese reported coercion attempts by security forces, including threats that those who didn’t vote might be jailed.

“The de facto president, who is also commander of the armed forces of this poor, miserable country … is spending $250,000 per day to pay 5,000 reservists and arm them” so that “those in the Resistance stay home and don’t go to the polls,” he told CNS, referring to the grass-roots movement that opposed the coup.

Indigenous activist Victor Martinez was among those not voting. The resident of Copan Ruinas said pre-election vote buying had been rife and “there are way too many police and soldiers.”

“This used to be a civic celebration, but it’s lost that flavor,” he said.

The interim government had promoted the elections heavily with advertising campaigns and was expected to interpret the large turnout as validation for Zelaya’s June 28 ouster and a signal for other countries to recognize the results and restore relations with Honduras. The country had become a pariah in much of the hemisphere.

But even with the election of a new president and a stronger participation rate than usual – authorities said turnout was more than 60 percent, six percentage points better than for the 2005 elections – it remained uncertain if the results would be recognized by other countries.

It also was unclear whether Zelaya would be restored to office before Lobo’s inauguration in late January and if Honduras can overcome the political crisis that damaged the economy and left the population deeply divided.

Lobo campaigned on law-and-order issues and promised to work toward reconciliation that would resolve the conflict, but he also capitalized on divisions in the Liberal Party.

Zelaya had proposed convening a consultation to rewrite the Honduran Constitution to permit reelection of the president. The Supreme Court declared the ballot measure he planned illegal, but Zelaya proceeded anyway. Criminal charges were drawn up, Zelaya was ousted from office and sent into exile June 28.

He sneaked back into the country Sept. 21 and has been holed up in the Brazilian Embassy ever since. His fate is uncertain; Congress was expected to meet in December to decide if he will serve out the final weeks of his presidency.