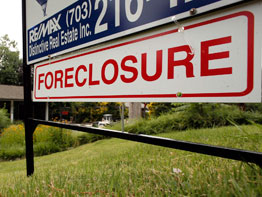 WASHINGTON – Owning one’s own home – part and parcel of the American dream – is turning into a nightmare for a growing number of American families.

The number of houses in foreclosure jumped 79.2 percent from 2006 to 2007, according to Realty Trac, an online seller of foreclosed properties. The 2008 figures aren’t available yet, but they are expected to be worse, given the current economic crisis the nation is facing.

Detroit and Wayne County, Mich., was the area with the highest foreclosure rate last year, with 4.92 percent of all households living in properties facing foreclosure.

Close behind are Stockton, Calif., with 4.87 percent of all households facing foreclosure, and Las Vegas, at 4.29 percent. In fourth place is the Riverside-San Bernardino, Calif., area, at 3.83 percent, but it placed first with actual 102,506 foreclosure filings.

Statistics for 2006-07 show that three of the four biggest percentage jumps in foreclosure filings were in or near Washington.

The Montgomery County, Md., suburb of Washington was 70th overall among U.S. metropolitan areas but registered a whopping 1,244 percent jump in filings, tops in the nation. The District of Columbia and its Virginia suburbs of Alexandria and Arlington placed 41st among metropolitan areas, but reported a 574 percent jump in filings, third in the country. And the Baltimore area, 66th in the U.S. in foreclosure rates in 2007, recorded a 544 percent hike in filings.

It got so bad in one Maryland parish that the pastor issued a letter in early October directing parishioners to sources to help them prevent foreclosure.

“Today, I read that in our neighborhood of Oakview alone, seven houses have gone into foreclosure in the past few months, another eight (were) condemned, bringing home how much the current economic crisis is affecting our parish,” wrote Father Michael Johnson, pastor of St. Camillus Parish in Silver Spring, Md., next door to Washington.

“I know that when people are having trouble with their mortgage and are worried about losing their home, sometimes they panic. And sometimes in their panic, they unwisely sign things they don’t understand and/or they do nothing and miss opportunities to better the situation,” he said, pointing to a Maryland Department of Housing and Community Development network to help homeowners stave off foreclosure.

In an Oct. 21 telephone interview with CNS, Father Johnson said he was prompted to write the letter because of “the amount of people that came in and had no clue what to do. I had a woman (come in) and she basically said, ‘I’m dealing with this situation and I don’t know where to turn.’ Another person was paying thousands of dollars to somebody to do something that the state was ready to do for free.”

The foreclosure crisis was just beginning to manifest itself a year ago, Father Johnson said. It can also be seen, he added, “in the amount of folks who come to the door for food. It has grown steadily over the past year. Most of those folks live in apartments, but not all. Some of the folks we’re helping, they’re trying to make the payments, trying to keep the electric on.”

Father Johnson said, “I think for most people the biggest thing is fear of the unknown,” adding that “a number of people have thanked me” for writing the letter.