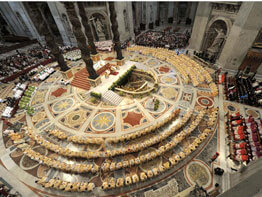 VATICAN CITY – Probably the most newsy – and somewhat unexpected – item in the final propositions of the Synod of Bishops on the Bible was a proposal to allow women to be installed officially in the ministry of lector.

The issue was raised in Proposition 17 on “the ministry of the word and women,” and it passed Oct. 26 with 191 votes in favor, 45 opposed and three abstentions, according to informed sources.

“It is hoped that the ministry of lector be opened also to women, so that their role as proclaimers of the word may be recognized in the Christian community,” the proposition states in its final sentence.

What Pope Benedict XVI will do with that proposal is unclear, according to Vatican officials contacted shortly after the synod vote.

The issue is not whether women can act as lectors, or Scripture readers, in Catholic liturgies. They already do so at Masses all over the world, including papal Masses.

The question is whether women can be installed officially in such a ministry. Until now, the Vatican has said no: Canon law states that only qualified laymen can be “installed on a stable basis in the ministries of lector and acolyte.” At the same time, canon law does allow for “temporary deputation” as lector to both men and women, which is why women routinely appear as lectors.

The reasoning behind the exclusion in church law of women from these official ministries has long been questioned.

For centuries, the office of lector was one of the “minor orders,” generally reserved to seminarians approaching ordination. While seminarians still are installed formally as acolyte and then as lector before being ordained deacons, since the 1970s service at the altar and proclaiming the readings at Mass have been seen primarily as ministries stemming from baptism and not specifically as steps toward ordination.

“It’s important to emphasize that any proposition for women lectors would simply arise from their baptism and not from any presumptive opening for orders,” said one Vatican source.

The synod took up the question because some have suggested that in promoting greater scriptural preparation and presentation the church designate “ministers of the word.” Lectors were seen as natural candidates.

Sources said that although this proposal passed overwhelmingly it drew a greater number of no votes than any of the other 54 propositions, most of which passed with fewer than five opposing votes.