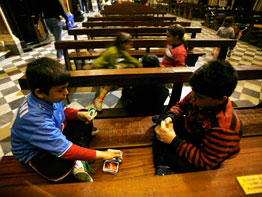 Masses at the Basilica of Our Lady of Mount Carmel, popularly known as “the Carmine,” were suspended after the basilica was occupied April 4 by more than 150 people who had been forcibly removed from a building they had been illegally occupying for several years.

The Carmelite priests, whose order has staffed the parish since the 13th century, have not made any public statements about the occupation.

And Cardinal Crescenzio Sepe of Naples, who had been meeting regularly with city officials, commented publicly for the first time April 21.

He said the city had promised him that the original group of homeless people, who were registered as residents of Naples, would be provided with temporary housing by April 23 or 24, but further meetings would be needed to find a solution for the homeless from other cities who have joined those occupying the church.

The group inside the basilica has said no one would leave until a place was found for everyone.

“This is a situation that no one likes. Occupying a church is always a desecration,” Cardinal Sepe told reporters. “I hope that by the end of the week pastoral activity can resume at the Carmine, which is one of the most important churches in the city.”

Italy’s civil protection service and neighbors around the church provided blankets, milk and food to those inside.

The homeless, who had used the basilica’s side altars to create private space for several families, said they organized crews to keep the basilica clean even as they cooked, ate, slept and washed inside the church.

The church dates back to the 12th century, although it was extensively rebuilt in the late 13th century and again in the mid-1700s. It houses a Marian icon, “La Bruna,” or “the brown one,” which is said to have been brought to the church in the 13th century by Carmelite priests fleeing violence on Mount Carmel in the Holy Land.