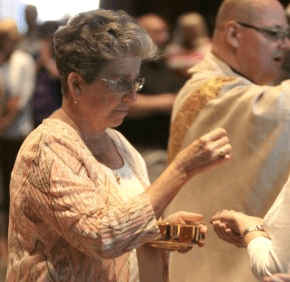 Special to the Review
SEVERNA PARK – Sister of St. Joseph Linda Larsen baby-sat a 6-month-old puppy in her office at St. John the Evangelist School as she conducted an interview and responded to phone calls.
She deftly handled Tucker with firmness and kindness, an approach that has served her well during her 27 years as principal of the school. As the pet of Father Jim Proffitt, pastor of the parish that sits alongside the Severna Park school, settled down for a nap under her chair, Sister Linda contemplated her “retirement.”
Next fall, she’ll participate in a month-long program, Women of Wisdom, to focus on her next step.
“It’s really a period of discernment,” she said. “When you’re a religious you don’t retire – you kind of get recycled.”
She foresees remaining in education, but dreams of being involved in a program that brings therapy dogs to visit hospitals and nursing homes.
Under her guidance, St. John the Evangelist was recognized as a National Blue Ribbon School in 2008. She twice was named Principal of the Year by the Archdiocese of Baltimore’s Department of Catholic Schools.
A graduate of Mercy High School in Baltimore, Sister Linda earned a bachelor’s degree in education from Chestnut Hill College in Philadelphia and then a master’s degree in education with a focus on administration and curriculum development from what is now Loyola University Maryland in Baltimore.
She knew early on she wanted to minister in education to make an impact in children’s lives.
“For many children, we are really the only security in their lives,” she said.
“When I first started teaching, it was a rarity that a child’s parents were divorced or separated, and it has become the norm … children come to school and they don’t know who’s picking them up. Children rely much more on their teachers and administrators.”
Her teaching career began in Philadelphia. Two stints at St. Thomas More in Baltimore, the second as principal, were sandwiched around teaching fifth- and sixth-graders at St. John the Evangelist. She returned to Severna Park in 1987, and a year later, was named its principal.
“As a principal, you have the ability to make an impact in a different way,” Sister Linda said. “You work not only with children but with their parents and teachers and the community.”
“Many people bare their soul to you. You deal with all types of situations, and for some you don’t have the answers right away. I have relied heavily on the grace of the Holy Spirit, and in time the answers would come. Sometimes a kid would be in trouble and the Lord would send me to that spot and I would say, ‘Oh, this is why.’”
She won’t miss budget meetings, especially after stewarding the school through challenging times that included cuts, but remains optimistic about the future of Catholic education.
“I think education is going to be very different in the future,” she said.
“Teachers now are becoming facilitators … and it’s more hands-on learning. I think there will be more digital learning and snow days will no longer be snow days – the delivery of education will change.”
She plans to remain at the parish convent in Severna Park, read and garden.
Her retirement has prompted numerous tributes, including a June 6 Mass; a St. John’s basketball jersey bearing her name framed and hung in the trophy case; and artwork made from popsicle sticks, each decorated by a student.
A favorite is a collage of an eagle, the school’s mascot, constructed from tiny photos of all her students, that reads: “With many thanks for helping our children soar.”
PrevNext