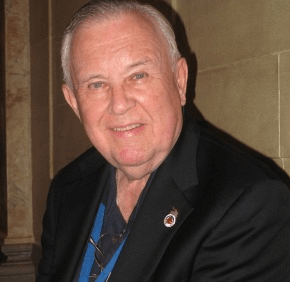 By George P. Matysek Jr.
gmatysek@CatholicReview.org
William Harris Jr., an indefatigable promoter of the Holy Name Society who traveled across the archdiocese and around the country recruiting new members, died Nov. 3. He was 81.
A longtime parishioner of Our Lady of the Fields in Millersville, Harris was an active member of his parish’s Holy Name Society who later served two four-year terms as president of the Archdiocesan Holy Name Union.
In 2011, Harris was elected president of the National Association of the Holy Name Society, providing leadership for an umbrella organization representing Holy Name Unions in 21 dioceses.
Harris believed every diocese in the country should have a Holy Name Union to provide support to parish societies. He made a push to draw Spanish-speaking and younger members, believing the best way to attract newcomers was a personal invitation.
“The perception of the Holy Name Society among some young people is that it’s a bunch of old people,” Harris told the Catholic Review in 2001. “We’re working hard to reverse that. The only way you can do it is by inviting people into the society one person at a time.”
Joe Orlando, a parishioner of Church of the Immaculate Conception in Towson and secretary of Catholic Men’s Fellowship of Maryland, noted that Harris had been active in the Cursillo Movement and for the last three years served as a board member of Catholic Men’s Fellowship.
“He was such a gentle spirit and a very humble man,” Orlando said. “He was a devoted man of God.”
The day before he died, Harris attended the special Mass at the Cathedral of Mary Our Queen in Homeland celebrating the 225th anniversary of the Archdiocese of Baltimore.
“At the end of the Mass, he said how thrilling it was to be there,” Orlando said. “He was beaming. He loved his Catholic faith.”
Harris is survived by his wife, Judy. He was the father of six, grandfather of 11 and great-grandfather of one. A viewing will be held Nov. 6 at Barranco and Sons Funeral Home in Severna Park from 2 to 4 p.m. and 6 to 8 p.m. An 11 a.m. funeral Mass will be offered Nov. 7 at Our Lady of the Fields.
To read more obituary articles, click here.
PrevNext