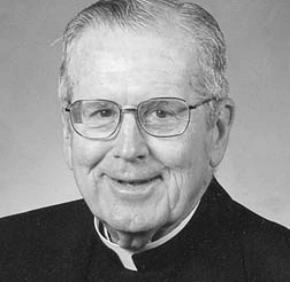 By Maria Wiering
mwiering@CatholicReview.org
Catholic teaching understands death as a kind of homecoming for the deceased, but for Monsignor Edward J. Lynch, the description is doubly appropriate. On Nov. 6, his funeral Mass will be offered at Church of the Immaculate Conception in Towson, where he was baptized 84 years ago, at 9 days old. It is also where he received his first Communion and was confirmed. He attended its elementary school and graduated from Towson Catholic High School, adjacent to his parish. As a young professional, he discerned his vocation to the priesthood in Immaculate Conception’s pews, and, as a priest, he served the parish twice.
Monsignor Lynch died Nov. 2 at Mercy Ridge Retirement Community in Lutherville-Timonium.
On the occasion of his 50th anniversary to the priesthood in 2007, he expressed amazement at how quickly the years passed. “I think, ‘How did this happen?’” he told the Catholic Review. “What’s the phrase? Time flies when you are having fun!”
‘Friends with everyone’
Bishop William C. Newman, a retired auxiliary bishop of Baltimore, called his longtime friend “a very good human being.”
“He was a very kind, affable – charming, really – and a loveable, funny person,” he said. “He was friends with everyone … and he had a genuine interest in their lives.
Monsignor Lynch attended what is now Loyola University Maryland, St. Charles Seminary in Catonsville and St. Mary’s Seminary and University in Roland Park. He was ordained in 1957 at the Basilica of the National Shrine of the Assumption of the Blessed Virgin Mary in Baltimore.
He was assigned as an associate pastor to Our Lady of Perpetual Help (now St. Gabriel) in Woodlawn in 1957, St. John the Evangelist in Severna Park in 1962, and Immaculate Conception in 1969.
At Immaculate Conception, he served as a high school counselor and athletic director at his alma mater, celebrated Masses at area nursing homes and brought Communion to Catholic patients in local hospitals.
In 1974, Monsignor Lynch was tasked with founding Our Lady of Grace in Parkton. Before his arrival, the Baltimore County faith community, which grew out of St. Joseph in Cockeysville, was called the Hereford Mission and worshiped in the Hereford High School auditorium. As the parish’s first pastor, Monsignor Lynch oversaw the construction of an all-purpose building the parish used for Mass, offices and events before building its church in 1977.
After nine years in Parkton, Monsignor Lynch became pastor of Immaculate Conception in 1983, returning just in time to celebrate the parish’s centennial. He served there until his retirement in 2000, and made several improvements to the campus. He oversaw the construction of a bell tower and perpetual adoration chapel, remodeled the entire campus’ heating system, moved the parish offices from the rectory – where he also added two new apartments – and expanded parking.
In 1990, Pope John Paul II named him Chaplain to His Holiness with the title monsignor.
A ‘servant priest’
Bishop Newman, who plans to preach the funeral Mass homily, recalled Monsignor Lynch’s love of storytelling.
“He had the habit of retelling the same story, not realizing he told you the same story,” he said.
The two priests met as basketball-court rivals in high school, when Bishop Newman was at Calvert Hall College. Both men graduated in 1946.
They became friends in seminary. As priests, they shared vacations with another good friend, Father John “Jack” Hooper, Monsignor Lynch’s seminary classmate who died of a heart attack in 1979. The three loved to play golf and tennis. After Father Hooper’s death, Monsignor Lynch and their other classmates continued their tradition of an annual vacation in Ocean City. Although not a classmate, Bishop Newman joined them.
Monsignor Alfred E. Smith, ordained a year before Monsignor Lynch, also went on the Ocean City trips.
“He was very funny; that would be one of his strongest points,” he said of Monsignor Lynch. “He made friends easily, and he also kept his good friends.”
In 2007, Monsignor Lynch told the Catholic Review that he was “very happy as a priest.”
“I can’t see myself as anything other than a priest,” he said. “To be there, say Mass, conduct other services, prepare them (people) for marriage or when they die, being with the family – all of those things are very wonderful.”
After retiring, Monsignor Lynch moved first to St. John Hall, Long Crandon, and then across the Stella Maris campus to Mercy Ridge. He continued for a time to assist with Masses at Immaculate Conception and St. Mark in Fallston.
Because so much of Monsignor Lynch’s life revolved around what he called “the Immaculate,” Bishop Newman called him the “Catholic Vicar of Towson.” When Monsignor Lynch moved to Mercy Ridge, he chose a room that had a view of the church, a Towson landmark. He had that room until recently, when he moved to Stella Maris for care.
“He was a great pastor,” Bishop Newman said. “He knew his people, he was interested in them, and he really loved and served them. He was a real servant priest to all the parishioners.”
Funeral arrangements
Reception of the body will be Nov. 5 at 4 p.m at Church of the Immaculate Conception, 200 Ware Ave., Towson. Viewing will last until 9 p.m, with a wake service at 8 p.m. A viewing will also be held on Nov. 6 from 8-10:15 a.m., with a Mass of Christian Burial at 10:30 a.m. Archbishop William E. Lori will preside.
Condolences can be sent to:
Dolores Lynch
4310 Josephine Avenue
Beltsville, MD 20705
Memorial fund:
The Rev. Monsignor Edward J. Lynch Scholarship Fund
for the Benefit of the Immaculate Conception School
200 Ware Avenue
Towson, MD 21204
To read more obituary articles, click here.
PrevNext